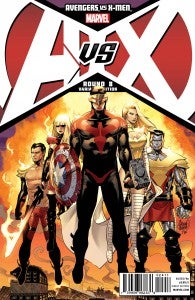 Marvel Comics has released a first look at the cover of next month's Avengers vs. X-Men #8, with art by artist Adam Kubert. The cover, a retailer incentive variant, features the Phoenix Force hosts--Cyclops, Colossus, White Queen, Namor and Husk--carrying the Avengers' toys: Captain America's shield and Thor's hammer.

The Kubert brothers (Andy and Adam) who rose to stardom in the 1990s while working on the X-Men titles, are pretty busy this summer, with Adam working on Avengers vs. X-Men for Marvel while Andy and their father--legendary artist Joe Kubert--work together on Before Watchmen for DC.

Check out the full description below!

Marvel is proud to present your first look at legendary artist Adam Kubert’s variant cover to Avengers Vs. X-Men #8 – featuring the Phoenix Five! Now that the Cyclops has declared “No More Avengers”, Earth’s Mightiest Heroes are on the run! The chase comes to a head in Wakanda, as the sovereign nation becomes the target of an out-of-control Namor! Will the onslaught of the powered-up Sub-Mariner overwhelm the Avengers? The answer – and a shocking truth about the X-Men – are revealed this July courtesy of Brian Bendis and Adam Kubert in Avengers Vs. X-Men #8, exploding into comic shops everywhere, the Marvel Comics app and the Marvel Digital Comics Shopthis July.