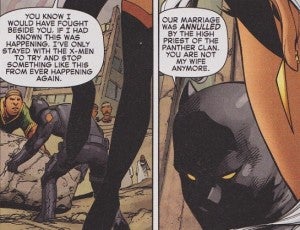 Once held up by Marvel Comics as a shining example of a successful relationship between two of their most popular and visible non-white superheroes, the marriage of Black Panther and the X-Men's Storm has been anulled...unilaterally, by Black Panther.

No, literally, by Black Panther. Since he's the head of his own nation and all, and apparently the guy who has the authority to declare the marriage annulled, he's done so in the midst of the Avengers vs. X-Men crossover, on which he and his now-former wife have been fighting on opposite sides.

The scene in question takes place within the pages of this week's Avengers vs. X-Men #9.

With Wakanda suffering serious damage at the hands of the Phoenix Force, Black Panther is helping his people try to recover when he's approached by his wife, who apologizes for not coming sooner, explaining that she had hoped standing with the X-Men would avoid exactly the type of thing he's dealing with. He tells her, essentially, to go spend all the time hanging out with her friends that she wants.

"Our marriage was annulled by the high priest of the Panther Clan," Black Panther explains. "You are not my wife anymore."

Ororo, of course, points out that Black Panther is himself the head of that clan, a fact which doesn't seem the surprise him much.

A few years ago, of course, the pair were thrown together rather hastily, dividing the fandom between enthusiasm for a high-profile story that depicted black superheroes in a positive light, versus those who believed that whole thing seemed gimmicky and that there was something vaguely racist about just deciding one day that a pair of superheroes of color would get married, having little in common besides popularity and skin color. The sudden nature of the annullment may cause some of the same type of outcry--"Where did that come from?"--but it's pretty justified in-story so seems less likely to be problematic for most fans. In fact, the duration of the marriage (six years) might actually be some degree of vindication for Marvel, as many opponents claimed at the time that it would only last as long as the next big event, its purpose having been served.

This may be setting the stage for a Black Panther movie, in which having him married to Storm--who is controlled by Fox, not Marvel Studios for the purpose of the film rights--would likely be impossible. A Black Panther movie was at one point rumored to be the next new solo superhero franchise to launch following Marvel's The Avengers, although that now appears to be Ant-Man.