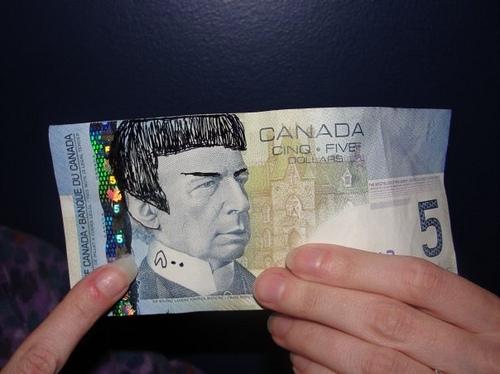 Former Canadian Prime Minister Wilfrid Laurier, whose likeness is featured on the country's $5 bill, looks just enough like the late Star Trek actor Leonard Nimoy that for years, fans have defaced the currency, drawing Vulcan hair, ears and Federation markings on his likeness.

That's apparently A-OK, according to the Bank of Canada (via CBC), although they did warn that the marked-up currency may be rejected by retailers, who could be either unclear on the law, offended or worried about counterfeiting.

"The Bank of Canada feels that writing and markings on bank notes are inappropriate as they are a symbol of our country and a source of national pride," spokeswoman Josianne Menard wrote when CBC inquired.

Bank Of Canada Says Spocking $5 Bill Is Not Illegal