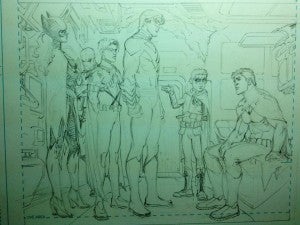 "Hail hail the gang is all here," tweeted Batman artist Greg Capullo, and attached the picture at left of Batman, Nightwing, Batgirl, Robin, Red Hood and Red Robin, which series writer Scott Snyder identified as being from Batman #15, somewhere around the midpoint of the upcoming Death of the Family crossover. The story, which features the first full appearance of The Joker in the New 52, will apparently not kill anyone right away, in spite of its title; this group of heroes is most of what would constitute the Batman "family." Alfred is absent, as is Commissioner Gordon, but we're going to ignore that fact on the grounds that neither of them hangs out all that much with the capes-and-tights crowd. Worth noting, perhaps, is that the scene appears to take place in the Batcave and that Bruce has either changed his costume somewhat or is still getting ready. Not only is his trademark cowl missing (obviously not a permanent change), but he's missing the stylish, bat-head-shaped kneepads on his costume and it doesn't even particularly look like he's got a logo on his chest, although that might just be something that's being added later. In any event, take a peek at a fairly distant issue of one of comics's best and best-selling titles and weep, for ye shall not be able to read it until December.

Batman #15 - A Sneak Peek From the Creative Team