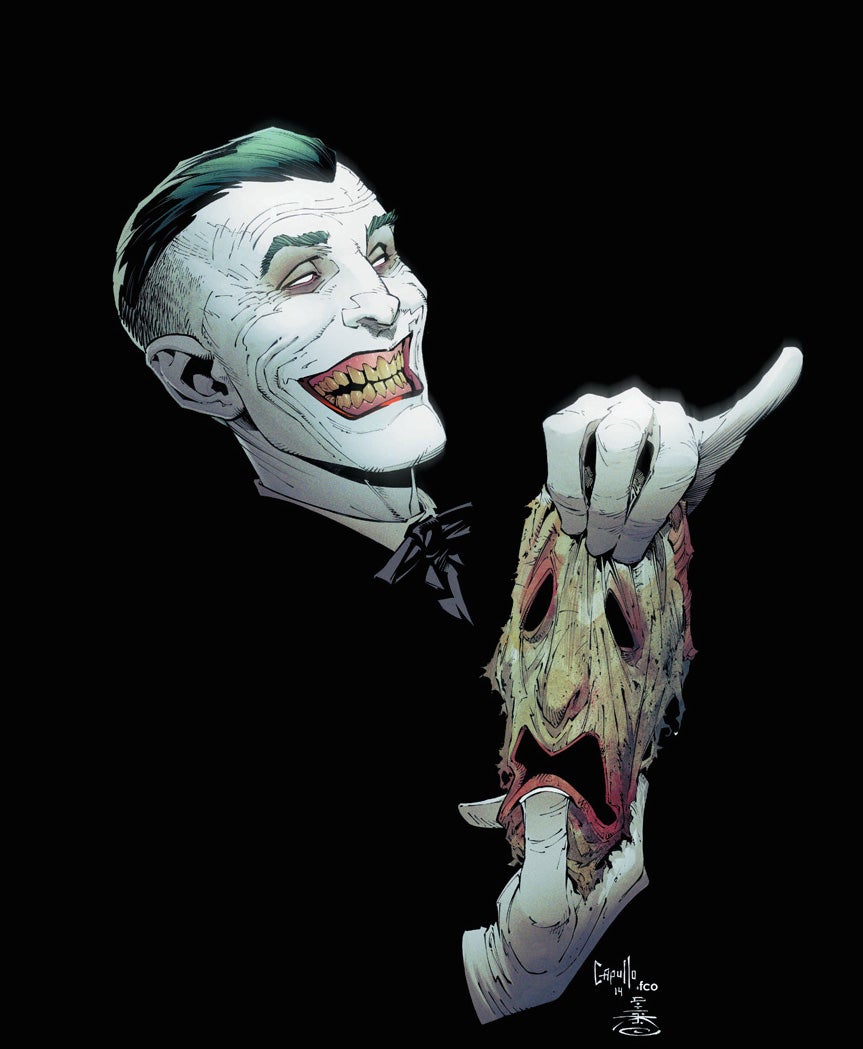 Warning: Major spoilers are below for "Batman #37." Do not read this interview if you haven't read the issue. Here, we'll even put Joker's rotting face as a blocker.

The Joker has always been the shadow to Batman’s light, but as "Batman #37" suggests, he may actually be Darkness itself. The Clown Prince of Crime stepped his game up in a major way for Batman: Endgame's third chapter, revealing his knowledge of Batman’s secret identity (for real this time), and suggesting--to convincing effect--that he may be a supernatural demon.

Conducting this train ride from hell is, of course, "Batman's" writer Scott Snyder. As the Joker drops his biggest bombshell yet on the Batman family, Snyder chatted with us about what all those twists and surprises could really mean. Below, he discusses Batman #37’s game-changing final panel, Bruce’s insecurity with the super-natural, and bold new direction—which he likens to Grant Morrison’s "Batman & Robin #1"—that he’s bringing to the title in June.

To start, how should readers interpret the issue’s last panel? Does the Joker really know that Bruce Wayne is Batman?

Without getting into how it came to be, which is part of the story’s mystery, this one was always designed to be Joker pulling out all of the stops, saying “I’ve always pulled my punches on you. Come to the other side and forget about your stupid Bat-Family and whoever you are under the mask. Come be Forever with me and the rest of the villains. Accept that you transcend all of that and become something greater.” So when Bruce rejected that invitation in Death of the Family, this is the Joker coming back and saying, “Let me know you how easy it’s always been for me to destroy you, and everything you stand for. Let me show you how little your life means, and how little you’ve done as Batman.” So there isn’t anything fake about it. There aren't a lot of sleights of hand when it comes to Joker knowing that Batman’s Bruce. He’s out to get him.

I always loved stories that approximate “the last Joker and Batman story.” Obviously, "Dark Knight Returns," but "Killing Joke" also has those stakes. So does "Batman Beyond: Return of the Joker," which is one of my favorite Joker stories. So for me, I wanted this story to be the culmination of everything we’ve built in Death of the Family and Zero Year, with a character that is our version of the Joker. This really is the final act of their war.

And since you’ve constructed an unofficial trilogy between your Batman and Joker, could readers go back and find clues or hints about “Endgame” in “Death of the Family” or “Zero Year?”
I think that thematically, it’s all one big story. So, it’s meant to start with Red Hood—if you believe the Joker is Red Hood—and the character’s idea that life is meaningless. He celebrates the randomness of violence and the futility in trying to do anything meaningful in life. He’s a terrorist in that regard. But then Batman comes along and says “No, life matter.” The message that Batman purports to Gotham by telling them to fight back against their fears. So then the Joker rises to this epic scale and says, “You’re right. You’ve almost won. You’ve given us both this meaning, and I serve you for that. Let go of the vestiges of your human life.” So when Bruce doesn’t, Joker says “Now I’m going to show you what I always was. I am bigger than you. I am larger than life. And I’m leaving you all behind. I am the invisible hand behind a lot of what’s happened, and now I’m going to just sweep you all away.” That’s what The Joker is saying. Whether or not you believe its true is up to the reader. Batman and Jim Gordon clearly don’t believe it. But that’s part of the story’s mystery. If it’s true, then we’re all in big trouble. But if it’s not true, how is Joker pulling it all off?

Right. In most canonical Batman tales, Batman has generally stayed away from supernatural forces. But now we’re approaching the idea that the Joker is a demonic spirit, or even the Devil himself. How has it been switching tonal gears, and writing a Batman story that’s borderline supernatural? What do supernatural threats reveal about Batman and Bruce Wayne?

One of the things that Batman struggles more than anything is his own mortality. It’s probably the biggest theme that we’ve run with, like in Court of Owls. They said to Batman, The city is much older than you, and you own it for one moment. And then that one moment will pass, and you won’t own it anymore. And Zero Year was largely about re-framing Batman for modern audiences, and showing how he’s deeply vulnerable and human. We saw how hurt Bruce can get. So here, the idea of Batman going against a Joker that’s supernatural, or just powerful in a way that he hasn't revealed to Bruce before, that was something that I had never seen. I wanted to walk a line that seemed risky and daring and fun. It’s a story that, above all, terrifies Bruce. Initially, he’s not going to believe that Joker’s more than flesh and blood. He’ll try to rationalize everything and try to find a logical solution. But as the story goes on, it gets scarier for him, because if Joker is who he says he is, and is that strong, then that’s really bad news for everyone.

I will say that at the end of this story, there will be repercussions. It’s a story where I’ll say goodbye to a lot of things that we’ve used in our run. We’re going to start a new chapter after this, in June.

Interesting. So what is it that you’re saying goodbye to, and then welcoming with this “new chapter?”

It’s hard to answer without spoiling a lot of stuff, but my feeling is that it would be easy at this point to sit back and do small mysteries with the Rogues, or to revisit characters that we’ve used. For me, this story is largely about saying “This is the end of the first big part of our run.” We’re going to come out swinging in June with a very different-looking book, and a very different cast of villains and characters and all kinds of stuff. So this arc is almost meant to be a celebration of everything we’ve done on Batman. It’s a celebration of Batman’s 75th anniversary, and it ’s a celebration of Joker’s 75th anniversary. And once we’re done, we’re going to try to do something very different.

And how would you describe the difference?

When we get there, I want it to feel fresh and vibrant and surprising. It should be totally exciting and unnerving. It’s all of those things. Once you get to the end of the story, I want you to say “Holy shit, what just happened?” Then when you get to the other side of it, you’ll know that we’re just getting started.

It’s very tempting to keep the sales high and just do what’s safe. We’ve done stuff that, to me at least, has felt terrifyingly risky. We redid the origin. We introduced Bruce Wayne’s possible brother. We cut Joker’s face off. So now, I feel like it would be pretty easy to just do a one-part poison ivy story or a two-part Clayface story. Instead, I want to do stuff that’s even nuttier than what we’ve already tried. I know that I keep saying that it will be crazy, but just wait until you see what we have in June. It’s out there. I want readers to open it, and have it feel like Batman #1. And it’s not an official renumbering, mind you. But I want it to feel like Grant Morrison’s Batman and Robin #1. The energy on that book, even after he had been on Batman for three years, was insane. That entire run was filled with crazy shit. He just kept doing stories that surprised people. So that’s my goal. That’s where Endgame is headed. This is is the third part of the Joker story, and also the last one for us. I don’t want to say I’ll never use him again, but this is really meant to close that chapter, and a lot of the themes and character’s we’ve used. We’re starting something really new afterwards.

Wow. So in March, we see Endgame crossover into a few separate one-shots. This is a pretty different formula from past Batman crossover events, where the story crossed into almost every Batman ongoing. Why did you decide to switch the recipe and do something smaller?

It was was really up to the creators. Like, Pete Tomasi on Batman and Robin is really engaged in his Robin Rising story. We talked about crossing over, and he actually wanted to at one point, but I felt like he would be stressful for that story, and he agreed. But for Batgirl, Arkham Manor, and the other book, I just talked to all the writers and told them that I didn’t want them to do an issue that’s going to interrupt what they’re doing. If they wanted to do it, they could just do it on the side. The advantage of the opportunity was, they weren’t going to get a lot of chances to write the Joker, and we certainly don’t have any plans to revisit that character for quite a while. So the question was: “Do you have a story that makes sense?” If so, then let’s do it and have fun. I think they appreciated that. Now, they’re able to do a story outside of their books, and not interrupting what they’re doing. We thought that it was the best idea as creators. Mark Doyle, the Batman editor, was really responsive to the idea as well, so we were really happy about that.

Cool. Before you head off, I wanted to know: Will you be taking a break in April and May? What’s going on in between Endgame and your new direction?
Well, I’ll be taking a break from the shop stands. I’m not part of Convergence, but I’ll be working ahead on Batman. What we have planned for June will require that preparation time.

Sounds good. Thanks for chatting with us, Scott.