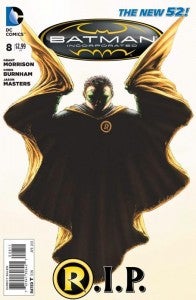 Yesterday, DC Comics released the solicitations for product shipping in June 2013 for their Justice League, The Dark, Superman, Young Justice and The Edge groups. Notably absent was the Batman family of titles--that's 13 at last count--and two of the customarily 52 ongoing, monthly titles that comprise DC's New 52 line of superhero comics. While nobody much would be surprised to see a Red Robin ongoing monthly added to the lineup, particularly with the character playing a bigger role in the Batman family these days (he was featured in Death of the Family and will be the first ex-Robin to team up with Batman in the Batman and Robin monthly following the death of Damian Wayne, Bruce's son and the most recent Robin), but that still leaves at least one position open, assuming DC isn't simply sitting on titles that could come in any family. But what's next for Batman Incorporated and Batman and Robin, two titles that relied heavily on the presence of Damian Wayne and which cannot continue, at least as they have up to this point, without him or someone to take his place? That's probably the real reveal that's being hidden by the absence of Batman solicitations; the June issue of Batman Incorporated--#12--is actually Grant Morrison's final issue on the series and his last mainstream superhero monthly for a while. While he's still got Multiversity and a Wonder Woman story (reportedly an original graphic novel) to tell, Morrison--who has been one of DC's loudest and clearest voices for more than 15 years now--is effectively exiting the New 52 with that issue and it's hard to imagine he won't have a big bang of a finale for his run. At the same time, Batman and Robin will apparently be Batman and Red Hood that month, so we've got at least one more month to find out what, if anything specific, the publisher has planned yet for replacing Damian Wayne. Or, at least, until we see that person on a cover. Will the Red Hood solicitation give an indication as to the direction the title could be heading next? It's difficult to say. In any event, one can safely assume that at least Morrison's, and possibly Batman & Robin's, story is a reason for the solicitation delay, it seems likely that Monday will be a pretty big news day for Bat-fans. Check back with us then--same bat-time, same bat-channel.

Batman and Robin: What's Next?

Dead by Daylight Is Reworking One of Its Best Features