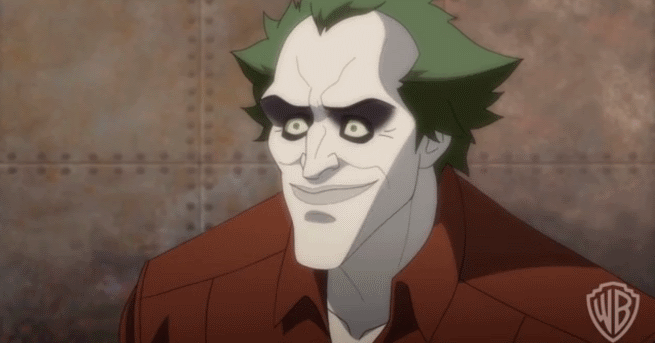 The scene shows the Joker having a conversation with…himself. Assault on Arkham takes place in the same universe as the Batman Arkham video game series, between the events of Arkham Origins and Arkham Asylum. The Joker is pining after Harley Quinn, who has been recruited into Amanda Waller's Suicide Squad and sent on a mission to break into Arkham Asylum. During an earlier scene, Harley humiliated the Joker and made it clear that she was through with him, but the Joker discovers that Harley may be up to something.

The video also features an interview with Troy Baker, the voice of the Joker in Arkham Origins and Assault on Arkham. Baker talks about stepping into such an iconic role and the differences between voicing the character in the game and in the movie.

"There's a challenge to it because, obviously with what we did with Arkham Origins, it wanted to specifically point to Mark Hamill," Baker says, "we wanted people to believe that was the same Joker they had seen in the games. Because, let's face it, he is the quintessential…he is the Joker. That's just what everyone's known for the last 25 years."

You can see the clip in the video embedded below. Batman: Assault on Arkham will be released August 12.