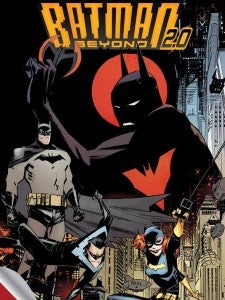 The first issue of Nightwing writer Kyle Higgins's Batman Beyond hit the (digital) stands yesterday, kicking off a new era that will also see Bloodshot and the H.A.R.D. Corps co-writer Christos Gage stepping in on Justice League Beyond. That's as big a shakeup as the Beyond universe has had since it was relaunched in 2010 as a digital-first anthology series. The pair joined ComicBook.com for an interview at San Diego Comic Con International last month, to discuss their future plans for the Beyond titles, Batman's major status quo change and Superman's first date after the death of Lois. ComicBook.com: What is on the horizon for your two books to start with? Christos Gage: Basically, we're digital-first so on alternating weeks. One week will be a new chapter of Batman Beyond and the next week will be a new chapter of Justice League Beyond. Eventually they'll be covered in print as Batman Beyond Universe. We're keeping the continuity of what's gone before. In his case, I'll let him tell you more about it, but it's jumping forward in time. Mine is too but it's not really a big change. For him, it's more like you'll start reading his first chapter and go, "Whoa! What happened here?" I'm going for that effect with the last chapter of my first arc, so we're sort of balancing each other out, which I think is fun. ComicBook.com: Well, and Kyle is doing a solo as opposed to a team book, so a time jump for a single character can seismically alter the book whereas for a team there's kind of a level. 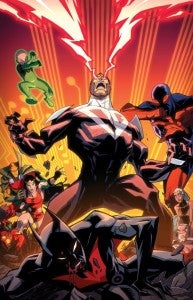 Gage: Well, and also essentially what the previous team had been doing--they'd added a number of members to the League and basically we're just at a point now where they're used to working with each other and kind of meshing as a team. So like you said, it's less of a "Oh, my God, all these things happened in my life." ComicBook.com: And you're kind of a team guy all of a sudden, too, right? You're also doing Bloodshot and the H.A.R.D. Corps for Valiant. We just spoke to Josh Dysart about that title. Gage: You know, it's fun. I've always liked writing team books. It's fun--you know, I grew up on the George Perez Avengers and lots of character balancing out-- Kyle Higgins: You've always got something to cut to. Gage: Yes, exactly! So it's fun but it's also challenging because you want to give everyone a little moment. That's what I was talking about before--in the Beyond continuity, Superman is a widower; Lois Lane has passed away, his wife, and in this storyline, our first storyline, he goes on his first date since she's died. And it's kind of fun because he goes to each member of the Justice League and says "What do people do on dates now? What do you think I should do?" And they each have their little moment which is fun. ComicBook.com: Now, you've been on the bat-beat for a while now. For my money, Nightwing is the most consistently enjoyable book in the Batman family. Higgins: Yeah, I've been in the Bat office for about two years now, which is cool. I mean, it's my favorite place at DC. I can't imagine anywhere else that could be better. So what's interesting about the Beyond stuff though is that it has no connection to what's going on in DC proper--it's all the animated series continuity--so it's very fun and liberating in so many ways. The fact that Chris and I are the only guys spearheading this universe allows for a lot more collaboration. It makes plotting things tighter, much easier. As Chris was saying with Batman Beyond #1, jump forward about a year in time. This really came out of my desire to bring some of the atmosphere back that the original cartoon had, which was all kind of predicated on the questions of what came between Batman: The Animated Series and Batman Beyond. Where did the Robins go? Why does Bruce have a cane and a limp--is there something specific there? What about The Joker and Barbara Gordon, Jim Gordon? So by jumping forward in time and kind of changing things up, as you'll see in the first issue, the question of what happened between the end of Adam [Beechen]'s run and the start of my run is going to be kind of the atmosphere for my stuff going forward. Right off the bat, we've got a new villain called Rewire, who's kind of an electricity villain. He's designed by Sean Murphy, so he looks like he stepped right out of the show--he looks really cool. Tony Silas is on art; he's got a really nice, dynamic, clean style. I knew his work from Venom at Marvel previously and it's a lot of fun, it really is. ComicBook.com: Is the small size of this universe also nice in that it kind of offsets the pressures of building the whole world? Gage: Yeah, I think it's more a plus than a minus, especially becuase you've got some brilliant folks who have already laid the foundation and done the world-building.  It's more like you're adding to it, hoping to keep up the high tradition of quality that goes with it. Higgins: Yeah, I think a lot about Bendis and Millar during those early Ultimates years and how it's really those two guys bringing that whole universe into existence. And like Chris was saying, a lot of the hard work has already been done for us. But it's cool--it's not that daunting. Or maybe I'm naive, I don't know. It doesn't feel that daunting because if it did, I'd be very aware of the pressure. ComicBook.com: I feel like you guys are really pretty well-respected. I don't know that many people who are like, "No, f--- Kyle Higgins, man! He screwed with my character!" Is it nice to kind of come in and have people generally enthused about seeing what you guys are going to do? Higgins: Yeah, the reception so far has been really encouraging and really supportive. I think, too, our editor Alex Antone has put a lot of trust in us. That's always really nice; it makes the job easier, it makes it an easier environment to be creative. ComicBook.com: Chris, the last time I spoke with you, we talked about The Man With No Name for Dynamite. In both cases, there's a big fan base...but it's not the traditional comics readers necessarily who all think they know how to do your job. Is it a little easier writing a team where not every character comes with the built-in baggage of an audience who has "their version" of the hero in their head? Gage: Well, I'll say what makes it easier: I grew up on Avengers and Justice League and the big things that happened to the characters would happen in their solo books. So there wouldn't be a big status quo change for Batman or Superman in Justice League because that would happen in their own books. There were some characters that were only in Justice League so, like Red Tornado the big stuff would happen to. But in this case, Justice League Beyond, you can do big stuff with all of them--except for Batman, of course--because that's the only place they're appearing. Higgins: Don't kill Batman, please. Gage: There goes my second arc. I don't know.