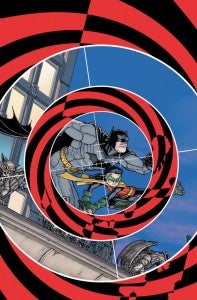 This May, Batman, Inc. #1 will hit the stands as part of the "second wave" of DC's New 52 launch books. Wtiter Grant Morrison (currently burning up sales charts and impressing critics with his rootsy reinvention of Superman in Action Comics) re-enters the Batman family of titles as arguably the pre-eminent Bat-writer of the last decade, but Scott Snyder and Greg Capullo's Batman is not only impressing fans and critics but outselling even the company's flagship Justice League title in digital form. The Court of Owls--a shadowy organization of villains who has apparently been present in Gotham for centuries--has been put in place by Snyder and will drive a family-wide crossover that will touch not just the books with "Bat" in the titles, but other titles as well, such as All-Star Western. Against all odds, it suddenly seems prudent to wonder: will Morrison's Batman be able to equal Snyder's? Snyder has come in with a vision the New 52 is a totally different playground than the one Morrison helped define five years ago, while similar in scope and ambition. Morrison introduced Batman, Inc. and played with the idea of Batman bouncing through time after his apparent death, making his stamp on history. With the Batman of the New 52, the Court of Owls didn't have--or need--time travel to shape Gotham's history in their image without the world's greatest detective discovering it up until now. Part of the fascination with Snyder and Capullo's Batman could, of course, be the way that it has (wildly) exceeded expectations. While many fans were excited to see the pair take over the book, both Snyder and Capullo were something of an unknown quantity for many fans and critics going in, since neither of them had spent a substantial amount of time on a top-tier book in quite some time (for Snyder that's ever, notwithstanding his terrific-but-short run on Detective Comics before the relaunch). It also helps that along with Batman, Snyder has taken control of Swamp Thing and made it one of the best books in the DC library arguably for the first time since Alan Moore was on the title. With Morrison, it was always the opposite. Everyone knew he was brilliant and filled with big ideas, and the question wasn't whether he could live up to Batman but whether Batman would be able to bring out the best in him. Over time, it certainly did--but with almost a year between issues and a fantastic neophyte taking the character's reins in his absence will the relaunch of Batman Inc. take Morrison's book from the top of fans' "must-read" pile to just another in a burgeoning stack of Batman monthlies?

Batman, Incorporated Returns - What Will be the Best Bat Book?