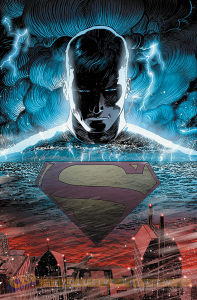 Batman's revised origin story for the New 52 just keeps getting bigger. Ahead of Monday's solicitations for new product shipping in November, DC Comics announced today that a number of other titles will tie into Scott Snyder and Greg Capullo's 14-part Batman epic. "John Stewart gets a zero issue in Green Lantern Corps #25, his Batman: Zero Year tie in," series writer Robert Venditti tweeted last night. "Couldn't pass up a chance to do that." That claim was confirmed today when DC gave IGN the exclusive that both Green Lantern Corps and Catwoman would have tie-in issues. Detective Comics and Chew writer John Layman takes the Catwoman tie-in, giving the issue a distinctly different feel as he says he won't be continuing on as the series' regular writer. "Catwoman has always been a favorite of mine. I jumped at the chance," said the writer. "I'd like to [write more], but the reality is I'm a slow writer, and my dance card is pretty full with Batman and Chew. But a one-shot issue is a perfect opportunity to explore a character I've always had a tremendous fondness for." 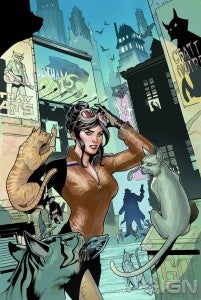 Detective Comics will also tie into the story, reports Comic Book Resources, along with Action Comics, meaning that Batman/Superman writer Greg Pak's first issue on Action Comics will be a Batman story. "We're going to see a young, cocky Superman testing his limits by taking on what might be the most powerful opponent he could ever find. In short, for the first time, Clark begins to think he might be an actual force of nature. We'll see if he's right," said Pak. "I also loved the idea of launching my Action run with a story set in the past. It's a great way to start the character at the beginning and lay out some of the big themes we're thinking about in a big way. And the nice capper is that Scott Snyder's one of my favorite people in comics and I was thrilled by the chance to come over and play in his backyard." Green Lantern Corps co-writer Van Jensen wants fans to keep calm and not immediately cry foul over the story suddenly becoming a multi-title crossover. "No one pushed the crossover down our throats," he said. "The Batman editors just let other editors know that Zero Year was happening, and they offered the chance to do a crossover if it would benefit our books in terms of story. And when we thought about it, very quickly we saw an opportunity to tell what amounts to a John Stewart origin story." 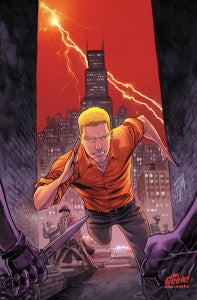 The Flash is going to play a role in the story, as well, giving him a taste for road-tripping in the comics before he heads to Starling City on TV in the upcoming season. "Without revealing too much, an event of a catastrophic nature will occur in Gotham, pulling in certain key players in the DCU," said The Flash co-writer Francis Manapul in an interview with MTV Geek. "The contrast of Barry's personality against the backdrop of the dark alleys of Gotham is going to be fun to play with."