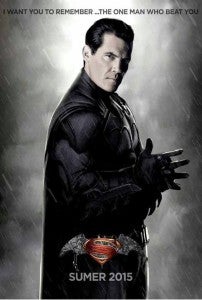 It's just a couple of weeks after the film was announced, and already there's a shortlist for casting Batman in the forthcoming Batman vs. Superman from Man of Steel director Zack Snyder.

The Hollywood Reporter says fan-favorites like Josh Brolin and Joe Manganiello are being considered, along with Ryan Gosling and Matthew Goode, for the "forty-ish" Dark Knight.

Goode and Brolin have already starred in DC Comics adaptations--albeit not ones that are set in the shared DC Universe. Goode was Ozymandias in Watchmen, also directed by Snyder, while Brolin starred as Jonah Hex in the poorly-received film adaptation of DC's scarred bounty hunter character. Manganiello was at one point rumored to be Warner Bros.' top pick to play Superman before the Henry Cavill announcement, although Snyder later said that nobody but Cavill was seriously considered.

Gosling, of course, is being rumored as Batman just days after his representatives batted away rumors that he was being sought for Star Wars Episode VII. He, along with Brolin, tends to get mentioned for just about every major leading-man role, so it's hard to guess exactly how much THR's sources are just going on conventional wisdom rather than a specific clue.

Richard Armitage from The Hobbit and Max Martini from Pacific Rim are also reportedly in the mix.

How seriously should you take this report, thought? Well, THR opens their story as follows: "First, some words of caution. The script is still being written, so nothing has been submitted formally to reps and actors. Two, according to sources, director Zack Snyder is only just beginning to look at actors."

Thanks to Super Podcasto Magnifico! for the perfect piece of art to accompany this piece.

Batman vs. Superman Movie: Casting Rumors For Batman Are Flying