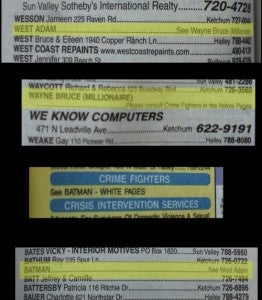 Fans of Family Guy will likely not be surprised that actor Adam West, best known for his camp-classic portrayal of Batman in the 1966 television series, may be a little eccentric in the way he conducts his public life.

Apparently, though, he's got enough clout in the small town of Ketchum, Idaho to get the phone company to go along with him...or else a Reddit user has too much spare time on their hands. In any case, there's a graphic posted to the popular social-sharing site over the weekend that's captioned, "I live in the same valley as Adam West. I decided to look him up in the phone book today."