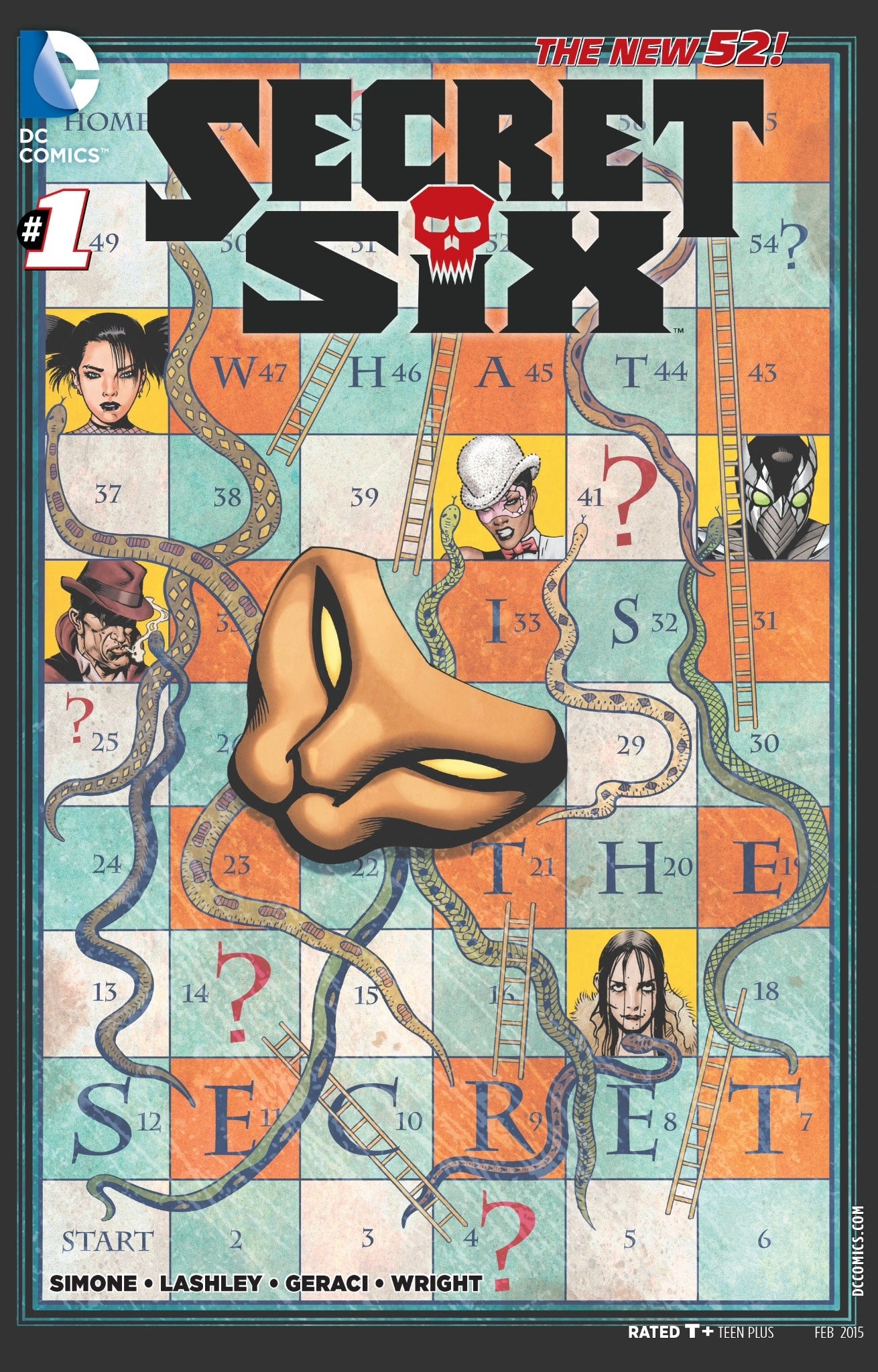 Secret Six was a cult hit in the pre-New 52 DC Comics publishing line. Springing from the success of Villains United, it spawned a six issue mini-series and a thirty-six issue series along with a ravenous fanbase. The series marks Gail Simone's greatest success to date and included many other comics greats like Nicola Scott and John Ostrander. After being brought to a much maligned conclusion by the launch of the New 52, the series is finally being resurrected with Simone at the helm once more. For many, the return of the Secret Six is a dream come true.

After reading the first issue it's difficult to not think of one classic cliché: "Be careful what you wish for."

Simone along with penciler and (sometimes) inker Ken Lashley bring the team back under a very different premise. It begins with Catman (the only returning character) being captured by a mysterious group of agents claiming to be ATF, but are clearly part of a more sinister organization. He awakens in a bare cell with five other people of equally bad or worse dispositions than his own. Together these six villainous men and women are to be tested and the price of failure appears to be their lives.

The literal mystery box in which these characters find themselves is the sole draw of the plot. It is like something from the Saw franchise, a sadistic mechanism wielded by a mysterious person who aims to stand in judgement of flawed human beings. The comparison is almost impossible to make after the Ventriloquist reveals her puppet which bears a striking resemblance to Billy the Puppet. This sort of setup made for a success at Lionsgate for good reason. Mysteries are attractive. We like to discover the how and why of complex scenarios and this one serves up questions in the most direct manner possible, presenting the text "What is the secret?" on the walls of the box.

That mystery is also the only real reason given to care about future issues of this series. At the end of the issue the question is "Why should I care?" instead of "What is the secret?". Simone fails to ever provide a reason for readers to care about any of the six characters trapped in this death trap. For whatever schlock the series may have devolved into, Saw was at least well enough written to begin with a sympathetic character or two.

Catman is presented as the hook of the story. Simone introduces him in a bar with a man on one arm and a woman on the other. Sex appeal is his only trait that borders upon making him likable or even human. His defining characteristic in the comics' opening pages is his violence, viciously threatening and beating several men in suits. There is an attempt at humor when Catman threatens to urinate on one man in order to mark him as property. The moment falls completely flat, far more likely to induce cringing than laughs.

The rest of the cast fares no better. In the worst instances there are characters like the Ventriloquist who is defined by another gag-worthy attempt at humor when she "accidentally" exposes her genitalia to Catman. Black Alice and Big Shot are as close as the series comes likable characters and that is most likely due to their lack of definition, filling the stereotypical roles of morose teenager and drunken P.I. respectively. Twenty pages is far too little space to flesh out a cast this large, and Simone fails to provide a single reason to care about any of the six people trapped together.

Writing a series about villains or deeply flawed individuals does not mean they must be devoid of humanity or made to be completely unlikable. In many ways Secret Six #1 is an inversion of its predecessor which managed to humanize a cast of criminals and killers. In the previous incarnation of Secret Six Simone used a mix of black humor, relationships, and relatable motives in order make readers care about terrible human beings. Killers and mad men like Bane and Ragdoll were made to feel human and readers fell in love with them despite their massive body counts and anti-social tendencies. None of that humanity or humor is present in this cast. All six of these people are mean spirited and devoid of genuine personalities.

Lashley's pencil work does nothing to enhance the script. The art in Secret Six #1 is a mess: rushed, inconsistent, and often difficult to read. These flaws may not come from a lack of skill, but a lack of time instead. Lashley only inks about half of his own pencils with Drew Geraci filling in on the rest of the pages. Much of the pencil work is left unrefined and often lacks any background or sense of place. This does not feel like the best efforts of a poor draftsman, but the hurried work of someone hurtling towards a deadline.

Whatever the cause, Lashley's work in Secret Six #1 is sub-par even on the best crafted pages. The lack of settings and background places the emphasis on the characters themselves and the pencil work can be even more wildly inconsistent than the inking. Paying attention to Lashley's faces provides a sense of how quickly this comic was produced. Catman's features morph between pages and are sometimes difficult to even discern. Eyes and noses occasionally slide across a character's face to impossible new positions. There is no sense of consistency in any individual's appearance. Body postures and language skew from the unengaging to the unnatural. Porcelain's first appearance shows her in a position that would only be found in a Victoria's Secret catalog.

The change in inking between Lashely and Geraci is very noticeable and creates a jarring effect. Lashley's inks emphasize his frenetic lines, picking up the roughness of his compositions and attempting to refine them. Geraci's inks eliminate this element altogether creating pages that are much smoother in appearance. The shift between these two is apparent every time it occurs with the most significant transition occurring on page 13. These changes in artistic style and draftsmanship are a distraction and a painful one.

Colorist Jason Wright is often left to define entire panels and pages lacking any semblance of the already dismal setting. Splashes of violet and yellow highlight the emotion and action of many panels, providing excitement where very little exists. Wright's work helps to make up for some of Lashley and Geraci's pitfalls, creating some sense of propulsion. He cannot cover up the significant break in style between the two inkers though and the colors often appear inconsistent between pages.

Secret Six #1 is a tremendous disappointment. All of the goodwill and high expectation built from Simone's excellent work on the previous incarnation of Secret Six are dashed in these twenty pages. This issue attempts to do something different by offering an intriguing, if unoriginal, premise. It fails not in its concept, but the execution. Neither the characters nor the art provide any reason to care. It is a comic without humanity or soul or a reason to exist.

Be Careful What You Wish For: Secret Six #1 is a Tremendous Disappointment (Review)