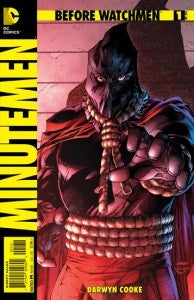 In an interview earlier today with The Guardian newspaper in the U.K., DC Comics co-publisher Dan DiDio suggested that sales would dictate whether there will be another series of Watchmen tie ins, and told the newspaper that the controversial Before Watchmen project is "a love letter to what [Alan Moore] created." The interview also gave fans their first full-color look at Jim Lee's Minutemen #1 variant cover featuring Hooded Justice (pictured at right) and their first-ever look at Jim Lee's take on The Comedian (below), and introduced people outside of comics to the project in a clear and concise way that only comics fans reading Previews could really understand up until this point. In an interview that focused on the controversy surrounding the creation of Before Watchmen DiDio told The Guardian that the publisher knew that Moore and many others would likely object to the prequels, conceding that even the DC staff weren't entirely unanimous in their support (whether he's suggesting former publisher Paul Levitz, who is widely believed to have prevented the project from moving forward for years before he was replaced by DiDio and artist Jim Lee, or someone else, is unclear). Still, DiDio says that all the negative attention didn't put them off the idea of making the books, but instead motivated them to make books that were artistically harder to criticize, in the hopes that their creative strength would outweigh the seemingly crass commercial machinations that made them a reality. "When you have a product like Watchmen that is as worldwide known as it is, and the fact there are millions of copies in print, we wouldn't be doing our jobs if we didn't go out and say, 'is there other ways 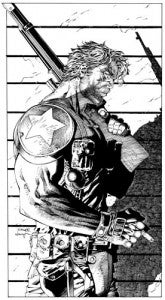 we can grow new material from this?'" DiDio said. "We went out and reached the original creators and they had passed, but we still believed this was the right choice to make. And in doing so we went out with the strongest creators possible, so while you may question the decision you can't question the quality of the product and the quality of the people behind the product." The publisher also took time out to say that while he sympathizes with Moore's personal reservations about the project, he rejects criticism from Moore and others that has essentially claimed the project is without merit and points to creative bankruptcy on the part of DC. He explained, "Honestly I can understand why he might feel the way he does because this is a personal project to him. He has such a long and illustrious career and he's been able to stand behind the body of work he's created. But quite honestly the idea of something shameless is a little silly, primarily because I let the material speak for itself and the quality of the material speak for itself." Before Watchmen begins next month; look for more coverage of the event at ComicBook.com as it draws closer.

Before Watchmen is a "Love Letter" to Moore, Says DC Comics