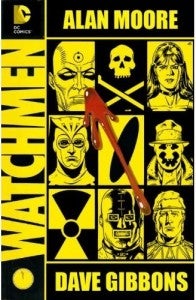 This summer, when the Before Watchmen series come to collected edition, it will be in the form of four hardcovers, each collecting two of the best-selling and controversial miniseries, according to the Amazon pages for the collections.

[UPDATE, 12/13/2012: DC has officially solicited these books via their blog, clarifying where the Dollar Bill and Moloch material will be reprinted. See the solicitations as the bottom for that information--or just know that we were pretty spot-on with our assumptions below.]

Each book will retail at $29.99 and be in DC's "deluxe hardcover" format. Based on the cover, it appears as though the Minutemen and Silk Spectre miniseries will make up the first of the hardcovers, available to Amazon on July 9 and so probably to comic book stores the week before. Each subsequent week of July sees a release: Comedian/Rorschach, Nite Owl/Dr. Manhattan, Ozymandias/Curse of the Crimson Corsair.

How the Moloch and Dollar Bill stories play into the collected editions? There's no clear answer, although since J.M. Straczynski wrote Nite Owl, Moloch and Dr. Mahattan, it doesn't seem outside the realm of possibility to include it in one hardcover that brings all of his work on the project together--especially since every other hardcover collects a six-issue miniseries with a four-issue miniseries, while both Dr. Manhattan and Nite Owl were four-issue stories. Including the Moloch story, at least, would nudge the size of the collection closer to being in line with the rest of the books.

The week before all of this kicks off, there's a reissue of Watchmen set for the same format as well, although DC has already reissued Watchmen as a deluxe edition hardcover in the past and there's nothing concrete in the item description that indicates this one is different in any way except that it has a new cover and the new DC logo.

The official DC solicitation information is below.

Before Watchmen Series to Be Collected as Four Hardcovers