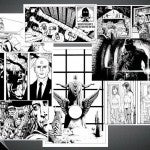 This weekend, DC Comics launched a website for The New Frontiersman, the fictional newspaper first seen in Alan Moore and Dave Gibbons' Watchmen. It's a front page with some stories "to be continued on page..." and no pages to flip through. It was a pretty unremarkable little site, even if the idea of setting up a viral marketing site for a comic book event was pretty cool. It also features links to additional images when you click on certain pieces of highlighted text, giving you a look at some images from the series and a peek behind the curtain of its creation, including the first look most fans (those outside of C2E2 this weekend) have had to see how the pages look in action (see the image at left).

, though is the result you get from the last time they tried it. Adding the word "the" to the beginning of the website's name (thenewfrontiersman.net instead of newfrontiersman.net) reveals an Easter Egg-laden website (screenshot seen at right), which features eight pages of content, including art, in-jokes and even a three-minute video (seen below), all of which were made for (or at least made to tie into) the movie version of Watchmen that came out in 2009. It sort of puts the comic site to shame, and while much of the content features versions of the Watchmen characters too similar in appearance to their movie counterparts to "borrow" it from the parent company, it seems too bad that DC didn't see fit to do something a little more ambitious for their microsite (at least as of its launch). I've always felt that the film, while flawed, was not bad and widely underappreciated, so it's good to see, at least, that DC can make some use of the good ideas left behind by the poorly-received adaptation.

Before Watchmen's New Frontiersman Has Been Done Before