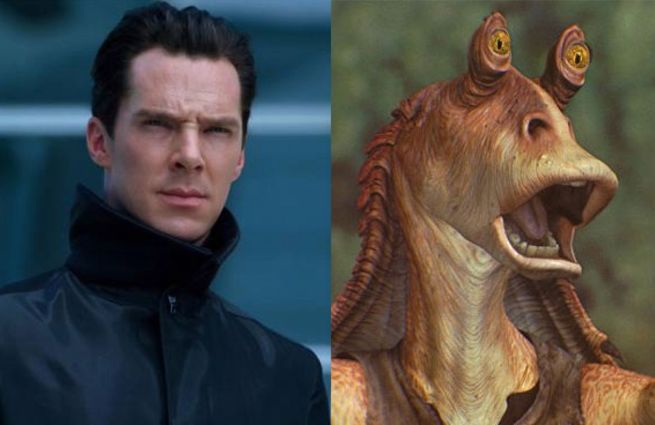 During an appearance on BBC America’s Graham Norton Show, Benedict Cumberbatch faced questions about if he was appearing in Star Wars Episode VII, which he seemed to mostly deny or avoid. When asked point blank if he was in the new Star Wars movie, Cumberbatch at first said, “No comment.” Before, he then added, “Of course I’m not.”

When Norton persisted by asking about a rumor that he was seen around the set, Cumberbatch said, “I did go to the set, which was fantastic. It was like walking through my childhood.” When asked if he might have asked to be a Stormtrooper or something, Cumberbatch again pleaded, “No comment.”

Cumberbatch also treated the audience to an impression of Jar Jar Binks, which can be seen at the two minute mark in the video below. After doing the impression, Cumberbatch followed it up by taking a shot at the much-maligned Star Wars character.

“You don’t make much money out of doing a good Jar Jar, let me tell you that. He’s the most loathed character of any franchise ever. Rightfully so, in my opinion.”

Star Wars Episode VII is schedule to open in movie theaters on December 18, 2015.

Benedict Cumberbatch Does Jar Jar Binks Impression, Calls Him Most Loathed Character In Any Franchise Ever

Will MJF Ever Leave AEW for WWE?

One Piece Editor Reasserts When the Manga Will Likely End