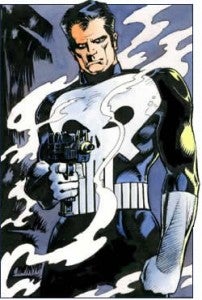 There have been innumerable characters over the years who have had their own ongoing solo series in comics,some going on to become highly successful, popular continuing tales. However, for every Batman, Superman, Spider-Man and Daredevil, there are countless others who have had their one and done series runs, (Dazzler and Jubilee being two that come to mind). There's an even more select group, who have endured countless relaunches, new creative teams, new character angles, but who can't seem to support their own, long-running solo series. Below is a list of those characters who might make for interesting limited series and/or are great on a team, but for some reason can't keep a series of their own going for too long. They have racked up many issues over the years, perhaps even cracking 100 issues at one time, but their series always seem to get restarted, relaunched, or rebooted.

Punisher (Marvel) Perhaps the king of multiple series launches and attempts is Marvel's premiere vigilante, The Punisher. Despite one, just over 100-issue series in the late 80s and early 90s, Frank Castle lands on this list due to his MULTIPLE iterations and appearances over the years in varying types of limited and solo attempts. Recent news of another relaunch of the character for this fall was announced just the other day, but, based on feedback from our readers, this move gets more of a roll of the eyes than a squeal of delight. Poor sales always seem to doom The Punisher, and history is not on his side in this most recent relaunch. Part of the problem could be his non-kid friendly character persona, which doesn't translate to building life-long readers from the ground up. Who knows, but only time, and sales, will tell if this new series will stick for the solo fighter. 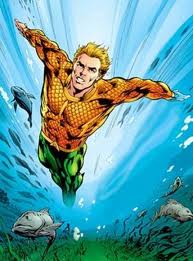 Aquaman (DC) The king of the seas? Check. A founding member of the Justice League of America? Check. Surprise return in "Brightest Day"? Check. A long-running, sustained solo series? Hmmm...we'll get back to you on that one. While he has enjoyed a long history in the DCU, Aquaman as a character capable of sustaining his own, long-running series has been problematic. He's had no less than four ongoing series in his history, and another relaunch of the character, as well as the entire DCU, is planned for this fall as part of DC's reboot. Over the years he's lost a child, lost a hand, grown a beard, fought Namor and protected the city of "Sub Diego", and yet the long-running series still remains a brass ring he has not grasped. Perhaps the reboot will give him a new way to lure readers! Just as a side note, his popularity probably wasn't helped any by his turn as something of a pop-culture punchline over the past few years, thanks in part to the series Entourage. 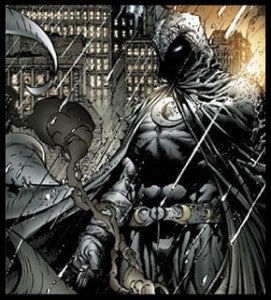 Moon Knight (Marvel) Moon Knight is a tricky case. He's a character that, like The Punisher, is a more hard-edged character that has had multiple attempts at the long-running series goal. Although his powers and villains are based around mystical and powerful forces with a touch of noir, the solo anti-hero turned respected superhero has had quite a long streak of solo runs, the most recent just launching a few months ago. He's had several talented writers behind him, Chuck Dixon, but it's unclear exactly why his recent solo series end abruptly and after a few issues. The character has also gotten new life with his work with Steve Rogers' Secret Avengers, where he has played a supporting role in an intriguing ensemble cast. Moon Knight is typically a critical fave, but commercial success has not always found him, despite several decades of comic book history behind him. 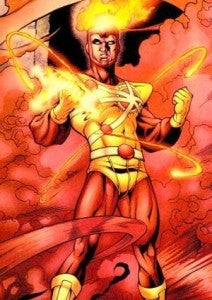 Firestorm (DC) At his core, Firestorm is probably one of the more powerful members of the DCU, with his ability to manipulate and change the molecular structure of any matter, his intangibility and last but certainly not least his ability to shoot bolts of powerful energy! While in fairness to the character, who has undergone not only multiple series but multiple people in his role, his first ongoing series was a victim of the massive cutback's DC made in the late 1970s. He has popped up in many major events over the years, such as DC's "Crisis on Infinite Earths" and "Identity Crisis", but he seems to work best as a supporting character, having had a couple of effective turns as a member of the Justice League. His longest series lasted just at eight years and 100 issues, and then his next series came in 2004. While his powers may be strong, he doesn't tend to sport as vast and strong a rogues' gallery as some of his fellow heroes. With another upcoming series planned with the DCU relaunch, maybe he'll get that shot! 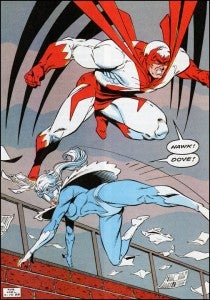 Hawk and Dove (DC) This one's a twofer! Characters who are opposite of one another usually make for good film, tv, books, etc., and the concept can work in comics as well. Hawk and Dove are two characters that have opposing views on violence, aggression, etc., but who both fight the good fight together. Created by Steve Ditko and Steve Skeates in the late 1960s, the pair were perfectly suited to represent opposing views in a divided nation plagued by an ongoing war and cultural clashing. These two have probably seen some of the more significant changes over the years, with powers changing, origins changing, and even completely different characters taking over the costumes at different points in time. The duo has seen at least 6-7 people inhabiting the roles over the past forty years. The pair have been given four attempts at series over the past years, and their combined issue run isn't all that impressive. While their dichotomy works, can it be enough to sustain a popular ongoing title? Again, you'll get to see that this fall when their next series launches. Lately, they've been helping out Oracle and company in Birds of Prey! 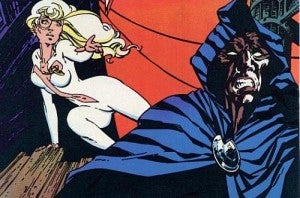 Cloak and Dagger (Marvel) Cloak and Dagger are sort of the "hard-knock life" entry on this list, not only because of their backgrounds as runaways and outsiders, but because of the many attempts to have them established in their own ongoing series. The pair have made appearances in dozens of comic book series, fighting alongside the likes of Spider-Man, Captain America and Doctor Strange, but they seem to be on the outs when it comes to their own title. They recently had a significant role in the Dark X-Men story when Norman Osborn recruits them for this team. They then enjoyed a brief stint on Utopia as members of the real X-Men, but left after finding out that they weren't really mutants and a bit of relationship drama caused that as well. They turn up constantly in various Marvel events and series, so they will be back. It's a pity though that their complex and interesting lives couldn't last more than a few issues on their own!