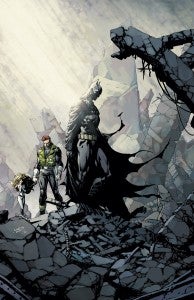 In advance of the International Exchange column over at The Outhouse, Dan Jurgens joined ComicBook.com to talk a little bit about Justice League International #3 and how he handles writing for a large, diverse cast of characters with different perspectives and motivations, set in the world of the New 52 where you don't have as much in the way of comfortable backstory or established relationships to fall back on.

ComicBook.com: Kind of an odd question, but had you considered avoiding the term “JLI” for a while? It's already being used here and while it's something that would of course eventually develop, the “JL_” names are longstanding comic book shorthand, which even have a little baggage attached in the form of Grant Morrison's JLA.

Dan Jurgens: I considered it for a bit, but the U.N.'s goal is so obvious here that it seeemed silly to avoid it. It's clearly meant to be an international team of heroes the UN can control. And, of course, grabbing the JL portion of the name is designed to enhance credibility.

ComicBook.com: Despite having had a year to draw the other guys, there's a lot of great Batman on the page from Aaron this month. As an artist yourself, is he just one of those characters that people try to stay “up” on, knowing that at any time you could be expected to draw a really dynamic Batman sequence?

ComicBook.com: I like the fact that the Russian Navy refers to the JLI as “The UN's special ops team.” Is that going to be the way that many ordinary people perceive the team?

ComicBook.com: “Bea will try anything once” is one of those statements that seems to return Fire to a pre-Checkmate (pre-angst) status quo. Booster's personality is a bit of the same, so far, with everyone thinking of him first as a huckster. Without taking the characters all the way into bwa-ha-hah territory, are you trying to slide some of these guys back to where viewers of (for example) Batman: The Brave & the Bold would recognize them?

ComicBook.com: As a writer, is it hard to balance a scene like the one with Ice and Gavril? I always have a hard time believing that in the middle of battle, with the world in jeopardy, you'd stop and ask about that hot girl at work—but it's a trope of action movies and stuff. Everyone does it across all media and certainly I know that no matter the stakes it's easy to get distracted by personal stuff.

DJ: They weren't quite in the midst of battle. They were traveling between points.

I certainly know what you're saying. It's a question of balance, fitting it in where it makes some sense while still moving the story forward.

ComicBook.com: With Fire's admission that “I like the attention,” my first thoughts drifted to similarities between that and what we've seen so far from Godiva. That might not be fair, but I don't really know her yet. You've said in many interviews that August General has become one of your favorite characters to write, but will we see a bit more from Godiva and other characters who, to many readers, aren't much more than a set of powers and a costume?

DJ: Of course. More of their personality traits and character depth will unfold a bit over time.

If you take it at face value, for example, Godiva seems to be a... diva. But we have to go beyond face value.

Fire says she likes the attention. I think that's consistent with the past as well as the future.

We have a big cast. We're getting there, in terms of more character definition.

ComicBook.com: It's hard to avoid this question—Godiva acknowledges here that she's “hardly equipped” for the job, and shortly afterwards we see Peraxxus fighting the League on an upcoming cover with the mysterious there-again, gone-again woman from the Justice League International #1 cover instead of Godiva. Could this signal the first change in membership?

ComicBook.com: Hey, whatever happened to thought balloons? You never really see them anymore, and I always kinda look at Guy's monologue at the end here and think, “If only he'd been quieter...!”.

DJ: Thought balloons have largely disappeared from comics, in general. There are circumstances where they work, others where they don't.

My general approach is that if one member of the team has thought balloons, let's say Rocket Red, then they all should. And Batman never should, in my view.