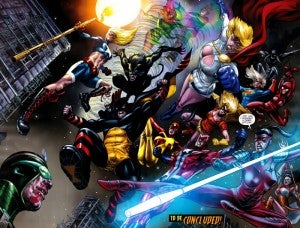 There's been a lot of discussion on message boards this week about the apparent introduction of a new Red Beetle in Justice Society of America #48. Appearing in a splash panel chock full of other JSA members and notable "legacy" characters (including Marc Andreyko's Manhunter), is a female character who appears to be wearing a red version of Ted Kord's old Blue Beetle costume. Who is this person? Is she a time-and-space-displaced leftover from one of the various recent crises? Dani Garrett, the granddaughter of Golden Age Blue Beetle Dan Garret? Or something else entirely? We've seen a couple of Red Beetles over in the pages of Dan Jurgens' Booster Gold run--one simply appearing as an anomaly in the timestream (looked like just Ted in a red suit, and he only appeared in one panel) and one who was created as a plot point in an alternate future devised by the villainous Black Beetle, who then took that Beetle's scarab and added to his own, making himself both more powerful and more red. There hasn't, as far as I know, been any explanation that would explain a female version of that character appearing in current continuity, although it certainly creates an air of menace around the apparent death of Jaime Reyes (Blue Beetle III), who was, like his predacessor, shot by Maxwell Lord--this time in the newest issue of Justice League: Generation Lost. 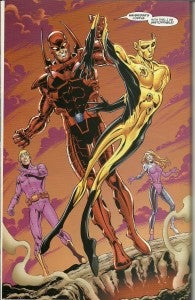 While it's widely assumed that Jaime will return (besides the fact that it was a comic book death and that a guy wearing a sophisticated and powerful suit of alien armor was killed by a bullet, there's the fact that he's been a popular addition to the Batman: The Brave and the Bold cartoon and that he may or may not have his own TV series coming up after a well-publicized guest appearance he'll be making on an April episode of Smallville), one of the elements that many fans have long assumed would keep him in play for a while was that he was a minority character and that most of DC's nonwhite, non-male superheroes have a pretty rough go of it. When you find one that connects with an audience, why squander it? Well, because if you can replace that character with a female--often more popular than male heroes among the male readership when put into a skintight body suit, and still not a white male), those who believe that part of Jaime's success is as a token minority are forced to shut their gobs. Anyway, it'll be a month before we hear anything regarding this character, I'm sure (it's not like the Justice Society is a good enough book right now to be generating buzz and interviews), so there'll be speculation for at least that long. I wish, though, that when we see a new character diving into battle alongside established JSA folks, we had some clue of who they are or where they came from first. 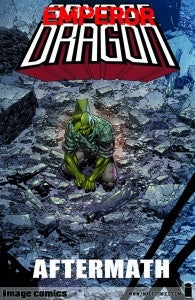 It's also the first week of a new Savage Dragon, and it's interesting: Malcolm, the son of the original Savage Dragon, had an African-American mother and definitely has some stereotypically black facial features. The thing that's the most interesting about it? It might be the first time that a lead character on a mainstream superhero book will be replaced by an African-American character and nobody bitched about it being tokenism. It's one of my least favorite knee-jerk reactions for fans, and it's incredibly pervasive right now. That's probably partially because there are elements of truth to it--many of the minority characters introduced in the last 20 years seem to have been granted minority status as an intentional attempt to reach out to non-traditional reader demographics. It might also just be the fact that most of those attempts have had limited success and the average comics reader is still a white male. Malcolm has been intended as the eventual successor to his dad for some time now, and it's hard to imagine fans being too upset by the (official) change since "our" Dragon died, for all intents and purposes, 21 issues ago and the title has since revolved around Malcolm, his sister Angel and the supporting cast (many of whom were killed during the recent Emperor Dragon storyline). Malcolm in particular has been the center of attention because he looks, to anyone who doesn't look too close, just like his dad. If this story had happened a couple of years ago, before Dick Grayson put on the Batman costume, Erik Larsen could have laid claim to having the first-ever teen sidekick who actually stepped up to take the mantle. It's a strong issue, which deals with the way Malcolm, Angel and the world deal with the loss of Dragon. Marvel Comics also has some grieving to do this week--both The Amazing Spider-Man #655 and Fantastic Four #588 see the casts facing down death. While the FF (and Spider-Man, who's doing more grieving than most this week apparently) deal with the loss of Johnny Storm at the end of last month's issue (since it happened off-panel and they haven't replaced him, we can safely assume it won't last long at all), Spidey in his own book attends to the affairs of J. Jonah Jameson's wife, who was killed when Spider-Slayers went after Jonah's friends and family as a way of targeting Spidey in a roundabout way. Writer Dan Slott calls it his favorite comic that he's ever written, and I can't blame him--it's the best Spider-Man story I've read since the Paul Jenkins story featuring The Chameleon's short-lived suicide back during the Peter Parker: Spider-Man series. That said, some readers will likely shell out the eight bucks for Fantastic Four and The Amazing Spider-Man and feel like, at the end of the day, they didn't get their money's worth. Why? It's not to do with the great stories contained therein but the fact that the lead feature in FF, and the first half of the Spidey story, are both completely silent, so that you can blow through them in a minute or two. Is it a silly and arbitrary thing to complain about? Sure. But at the end of the day, I think many fans will feel like with DC dropping prices across the line last month, any Marvel book that costs $4 or more for a standard issue should have enough dialogue to last longer than your average bowel movement.

Blue Beetle's dead, new Beetle's red, Savage Dragon is black (and so is the mood at Marvel)--a colorful week in review

Kiki's Delivery Service Gets Reimagined as the Coziest Video Game