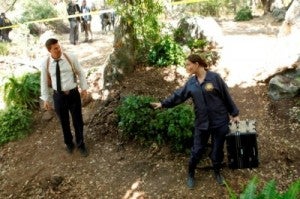 David Boreanaz, beloved by fanboys and fangirls around the world as the star of Joss Whedon's Buffy the Vampire Slayer and its spinoff Angel, tweeted earlier today that this year's San Diego Comic-Con may be the last for Bones, the FOX series on which he's a headliner with Emily Deschanel.

"SDCC 2012 shld be a blast and quite possibly the last for ‪#Bones‬ ?" Tweeted the star, who was also featured in the direct-to-video animated feature based on Darwyn Cooke's DC Comics miniseries The New Frontier. "Farewell tour? Look forward to seeing everyone there." A series of surprised and alarmed responses from his Twitter followers asking if this meant Bones' end was imminent received no further elaboration from the actor, who hasn't tweeted again since.

Bones, a popular police procedural based on the novels by real-life forensic anthropolist Kathy Reichs, had a shortened seventh season this year, but that was credited to Deschanel's pregnancy and another series--Finder, also created by Bones co-creator Hart Hanson--filled its hiatus weeks on the FOX schedule. Ever since the two characters at the heart of the series--FBI Special Agent Seeley Booth (Boreanaz) and consultant Dr. Temperance Brennan (Deschanel) finally consummated their long-simmering sexual tension at the end of season six, fans and critics have speculated that the series' end could be around the corner. When TVLine's Ask Ausiello column recently asked Hanson about the prospect of the eighth season as its last, he dismissed the notion outright.

“I could see Season 9 or 10 being the last,” Hanson told the site. “But definitely not [Season 8]. Post Booth and Brennan being together, there’s a good three seasons [of story] left.”

Obviously, the show could go on without the cast and crew making their way to Comic-Con, especially with Hanson developing new projects (Finder was cancelled after just one season) and both Boreanaz and Deschanel having young children. FOX's Glee, however, reversed that stance today and decided to attend this year's Comic-Con after previously announcing that they would not.

San Diego Comic-Con will take place July 11-15, and ComicBook.com will be there to bring you news from the floor.