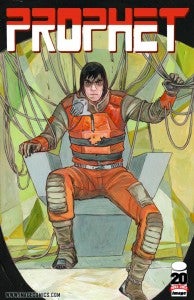 Brandon Graham, the cartoonist behind indie hits like King City and Multiple Warheads, recently took over Prophet with #21, as part of Image Comics's relaunch of Rob Liefeld's 1990s Extreme imprint. He's done so to largely positive reviews, bringing with him artist Simon Roy (Jan's Atomic Heart) for the first initial launch and redefining the look and feel of Prophet--formerly a pretty standard superhero book with a time-travel spin--completely. With a sold-out first issue, glowing reviews and a small avalanche of press coverage, both of the comic and of its press coverage. Graham joined us to talk about these issues, and how he came to be involved with the Extreme relaunch. This particular interview--relatively short, in comparison to the multi-part roundtable that Newsarama pulled after it became controversial--is presented without any alterations, except for spelling, capitalization and grammar, which is how all of the Q&As I do here at ComicBook.com are done. ComicBook.com: So for the uninitiated (which included me until I did a little homework), how did you end up at Image? You've done some mainstream work with Hack/Slash and House of Mystery but largely are an indie guy, and seemingly pretty happy that way. Brandon Graham: Right. Usually when I do anything mainstream it's just a quick job or something for fun but yeah, that's not my scene. I ended up at Image after becoming friends with Joe Keatinge who is writing the new Glory. Joe introduced me to Eric Stephenson the king of Image when I was having some problems wrangling the rights to get my book King City published. Stephenson really stuck his neck out for me and helped the book make it to print. I've been really impressed with how Image treats creators. CB: How involved is Liefeld in the day-to-day at NuExtreme? The one time I spoke with him I got the impression that it was simply not something that was taking up a lot of his time. BG: Liefeld has been really supportive but also hands off on the making of the book. I let him know when I'm planning something drastic and he's always really enthusiastic about what we're doing with his characters. Sometimes I'll email him these insane ideas like "hey can I can I bring back Riptide as a dolphin with gastrointestinal problems ?" and he'll write back  "DO IT!!" so I can't complain. CB: And is it nice to have an environment that seems to be, once you've landed the gig, that the "boss" is largely not present? BG: Yeah, I really can't see making comics any other way. One of the main reasons I took this on was how open to my ideas Stephenson was when we first talked about it. I've worked on comic jobs where you have to check every line you make with an editor and I find that kind of work stifling and gross, if that's how all companies were I'd rather get a real job and draw comics on the side. CB: The fact that this take on Prophet is so much different from the previous iteration has been a big boon for the book, since the content suits your (and Simon's) style so well. Is there a kind of thematic through-line that runs from the old book to the new one, in terms of explaining why you're taking over the old title and numbering even though it doesn't seem to be the same Prophet? BG: I'm trying to stick to a lot of the same themes as the original run. I like the idea of it being a man out of his time with a mission to do. It's not exactly the same Prophet but showing what that's about is a big part of the series. The old issues were so open that it allowed this big of a jump. I'm not sure we could jump genres like we did with many other books. CB: I've seen a lot of fans commenting on how your issue really should just be a new #1. How do you feel about that, given that a history with the original character not only doesn't really help understand the new issue but might actually hurt a reader who tried too hard to make the pieces fit? BG: I really like it starting with #21 both as a middle finger to DC's relaunch and to convey that there's a lot of back story to the comic. CB: It's interesting--with Extreme and Top Cow both (to varying degrees) blowing up the world and starting over--and with Image taking on Vaughan and Staples's Saga, this strange, unique book seems like it "fits" Image more now than it would have at any other time in the publishing history. Do you think that's helped in terms of building enthusiasm and support in the company and the comics community? BG: I haven't read Saga yet, the cover looks cool. but yeah, Image is such a different animal now that it was in the past. It's hard to look at something like Orc stain and imagine that it came out from the same publisher that did Spawn #1. I started getting published in the 90's and it was a such a struggle to get work if you didn't draw like old Image. Such a different environment. CB: With a book that's sold out at the Diamond level before it ever hits the stands, is it weird to see the disconnect between the enthusiasm for the book, and for the Extreme relaunch, while dealing with people who are really skeptical of Rob, and/or the creators? BG: Yeah, I mean I might feel skeptical myself if I wasn't in it. 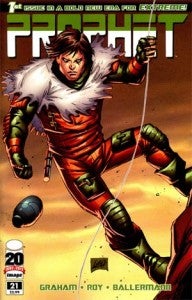 Obviously in the case of the Newsarama interview, you said that your widely-reported criticism of Judd Winick was important because in order for the industry to grow artistically, creators have to be able to criticize one another. When the reporter in question took what appeared to be some cheap shots at Liefeld, he and a couple of other Image folks didn't take it well. Personally, I can see what the inherent issues were there, but did you want to explain that for readers whose only exposure to the whole controversy was the aftermath, when the interview had already disappeared from the Internet? BG: Like you said, the gist of it was that the interviewer said how he felt about Liefeld's work and I said how I felt about Winick's work and then the guys at Newarama decided to edit out what I said out but leave in what the interviewer had said. Obviously Liefeld and Joe didn't like the hypocrisy of only certain kinds of s--t-talking being allowed. Personally I'm all for honest discussion and it's no big secret that some people don't like Liefeld's work. So whatever, talk about it- I think the whole incident said bad things about the journalistic integrity of the editors at Newsarama. But I don't think it was a huge surprise to anyone, they exist to promote comics they don't do critisim, it's a cheerleader site. They've certainly promoted my stuff in the past so I can't complain too much but stuff like that doesn't do anything to make comics better it just tells you what's coming out. In retrospect I think that my s--t talking Winick might have been somewhat counterproductive. I don't like his writing and I don't respect that he was on a reality show but attacking people personally won't cause anyone to reevaluate their own work as much as just make them think of me as an asshole. But I do like the idea of stirring things up and it frustrates me to see so much crap on shelves when I know that there's so many amazing creators doing work that doesn't make it into stores. I think what comes out every month could be sooo much better. CB: You've had good reviews in the past, but not as much attention on your books or, presumably, on you personally. Is it strange for the first time many readers have heard your name to be a sell-out? BG: Ah, all my talk of integrity and all I'm known for is a sell out. I dunno the last couple years has felt like a lot of attention. The Prophet attention is cool but it doesn't feel too real yet, after all it's just for 24 pages that Simon drew. I'm glad people like it but we're barely started. I saw a comment on a site that said something like "this guy sure seems cocky for only having one book out." I can't quite wrap my head around the idea that there's people out there who have heard of my work but don't even know that I draw. CB: How much have you worked with Simon to perfect the character, atmosphere and animal designs for the new world? With three artists already named to help out on this title, it seems like you'd have an investment in it in terms of being the one guy who's married to the book--and you've drawn your own stuff in the past. BG: I do some layouts that me and Simon back and forth. I think I did some sketches of the vagina alien in #21 too and sometimes I send Simon Photoshoped things of what I'm thinking. I have a lot of faith in Simon and I think his work feels more grounded in reality than mine. He's a fantastic writer as well and contributes a lot to the writing end. That's a cool thing about this book is that everyone involved does every side on comics by themselves. Me, Simon, Farel [Dalrymple] and Giannis [Milonogiannis] all write, draw, color and letter our own books. Even the letterer, Ed Brisson, is a writer who has drawn his own books in the past (and simon's first publisher.) So I have faith that everyone knows what makes a good comic We all seem to be on the same page and even more importantly, I think we're all excited about the work.

PROPHET Writer Brandon Graham: "I think what comes out every month could be sooo much better."