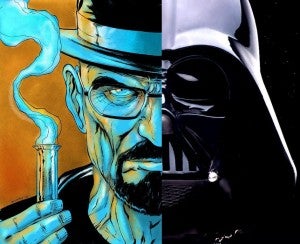 Just yesterday, Lost writer/producer Damon Lindelof, who himself has a bit of experience writing Batman comics, compared Walter White, the troubled and often evil soul at the heart of AMC's Breaking Bad, to Batman.

"Because millions upon millions of people are murdered by criminals all the time — especially in comic books," Lindelof said. "But the sons and daughters of those people do not become Batman. But Bruce Wayne? Bruce was different. There was something inside him. Lying dormant. He just needed something powerful enough to awaken it."

Bruce was already Batman, in the same way Walter White was already Heisenberg, he said; there just needed to be a catalyst to start the reaction.

"People like competency," Gilligan said simply when discussing why he thought audiences responded to Walter White even though he is, objectively, a terrible person. "What is it people like about Darth Vader?  Is it that he's so evil, or that he's so good at his job? I think it might be the latter. All the fears I had – 'Boy, no one's gonna sympathize with this guy'– turned out to be unfounded, which was a very interesting revelation."

Asked whether he thought Heisenberg was like Vader--a heroic figure on a kind of tragic journey in which evil is one of the stops--Gilligan said no.