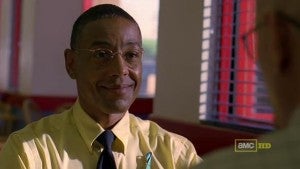 Last weekend at Fan Expo in Toronto, Arrow star Stephen Amell held court in a Q&A session and fielded questions about everything from the behind-the-scenes production of the show's first season to his interest in a Justice League movie.

Perhaps the most interesting thing he said, though, was that his performance as Oliver Queen was inspired by one of TV's most notable Very Bad Men.

That would be Gustavo Fring, the character played by Giancarlo Esposito on the hit AMC series Breaking Bad.

Ironically, it came up when a fan asked him whether he'd taken cues from Justin Hartley, who played Oliver Queen and Green Arrow in the long-running CW series Smallville--a show that ended just before Arrow began.

"I've never seen one minute of Smallville," Amell confided in the audience at his Q&A session last weekend. "You know what? I did take inspiration from people but it purposely was not Justin [Hartley] and that incarnation of the character. There were a couple of different characters that I watched, one of but not limited to Giancarlo Esposito from Breaking Bad."

The pair were both on hand at Warner Bros.'s Comic Con party celebrating Superman's 75th anniversary, and so while Amell said Esposito was nothing like Fring, the actor added that "there was something about Gus Fring that was slightly homicidal but very measured and put together and there were elements of that that I really wanted to bring to Oliver's character."

Arrow returns to The CW on October 9, and shortly thereafter we'll start seeing the expansion of TV's DC Universe with characters like Amanda Waller and The Flash.