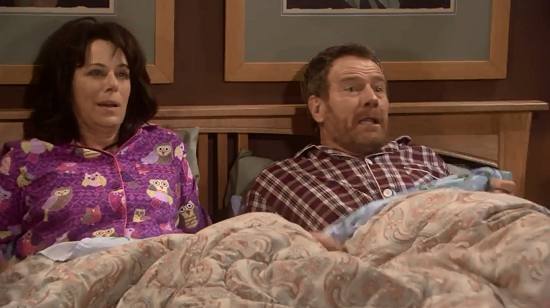 One of the most persistent jokes made by fans in the lead-up to Breaking Bad's finale earlier this year was that at the end, Walter White wouldn't die, but would enter Witness Protection and go start a new family--kicking off the events of Malcolm in the Middle, a series on which Breaking Bad star Bryan Cranston also starred.

And if the video below is any indication, an "alternate ending" for the series that presents itself as just that may be making its way onto the upcoming Breaking Bad Season 5, Part 2 Blu-ray.

Posted to YouTube, along with the show's gag reel, by someone named Michael Davies (not Talking Dead and Talking Bad executive producer Michael Davies), the six-minute video sees Cranston's Hal wake up in bed next to his wife Lois and recount to her a half-remembered account of his "dream" in which he was a meth dealer.

The premise is great; the execution probably could have been cut about in half. Still, check it out. If this turns up on the DVD, it will be one of the cleverest additions to such a package in recent memory.

EDIT: The video below has been taken down by Sony, but various news organizations are reporting that it is, indeed a feature for the DVD and will be available soon.