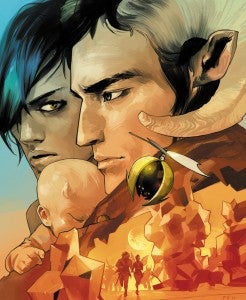 Brian K. Vaughan became a comics legend as the writer of such series as Y: The Last Man, Ex Machina, Runaways and Pride of Baghdad. During Image Comics' Kirkman Talks Creator-Owned panel at the 2011 San Diego Comic-Con, Vaughan announced that he is returning to comics to launch Saga at Image Comics in 2012. Saga is an all-new ongoing science fiction title co-created with artist Fiona Staples, whose past work includes Jonah Hex, Mystery Society, Northlanders, and North 40. Saga will tell the story of one young family fighting to survive a never-ending war. "It's an honor to be doing my first work with Image as they start to celebrate twenty years of publishing creator-owned comics," said Vaughan. Vaughan continued, "I love this medium more than any other, and I've been dying to tackle one more epic ongoing monthly series, but I wanted to find the right story and the perfect collaborator. I'm more excited about Saga with co-creator Fiona Staples than any project I've ever worked on, so I hope we'll be able to explore our strange new universe for years to come." "I don't think I've made it a secret that Brian is one of my absolute favorite writers in comics and my enthusiasm for his excellent work makes me beyond excited to welcome him to the fold," said Image Comics Publisher Eric Stephenson. "Likewise, I've admired Fiona's work for years, and I think she and Brian are a perfect match. There aren't enough superlatives for a team like this!"

Brian K. Vaughan Returns To Comics With Saga From Image