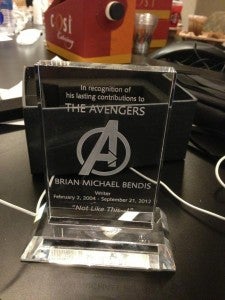 For the better part of a decade, almost every news story about Brian Michael Bendis has included the identifying phrase "Avengers and Ultimate Spider-Man writer." Well, apparently last Friday marked the official end of the Brian Michael Bendis era on The Avengers--at least as far as Marvel is concerned.

The fan-favorite writer just tweeted an image of a plaque awarded to him by Tom Brevoort, "in recognition of his lasting contributions to The Avengers."

The plaque, which was also adorned with the infamous line "Not like this!", which was uttered during one of the many controversial deaths that Bendis wrote early in his eight-year run on the titles.

Perhaps most interesting, though (for trivia buffs only) is that the plaque is dated, giving a "lifespan" to Bendis's time with The Avengers that begins on February 7, 2004 and ended on September 21 of this year.

While it's not news that Bendis is no longer writing the characters, this image is one of those "Wow, that's really it" moments, something concrete to attach to the events.

And now, of course, he's onto the X-Men and the Guardians of the Galaxy...!

Brian Michael Bendis Is Officially No Longer Writing The Avengers