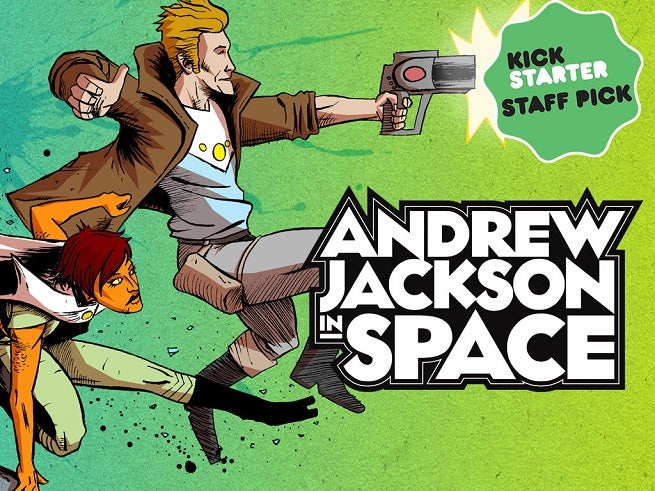 With just over two weeks left to go in the campaign, Stronghold writer Brian Visaggio is hoping to fund his next project -- Andrew Jackson in Space -- via Kickstarter.

The series is set in 1801, when one day, future President Andrew Jackson woke up on the far side of the galaxy. Here's how the campaign describes the title:

"This lunatic frontier bastard is using every ounce of wit, courage, cunning, and unprovoked violence to make his way home to his beloved wife on Earth. Mixing equal parts Doctor Who and Indiana Jones, Andrew Jackson in Space is a pulp-style sci-fi adventure comic flung across thousands of light years, featuring vagrant queens, amazing artifacts, and a guy bursting into a courtroom brandishing a pistol."

Rewards include copies of the comic, of previous comics that Visaggio and his creative partners have worked on, and a script review from the editor, Heather Antos of the Unlawful Good anthology, which will be released digitally via ComiXology soon. We spoke with her about it at New York Comic Con, and you can see it here.

Of course, Andrew Jackson as a historical figure is an odd one. Emblematic of a kind of frontier sensibility and a very antiquated notion of masculinity, Visaggio chose him in part not in spite of, but because of the fact that he's not viewed as a particularly nice guy.

He spoke with us this week about the project. 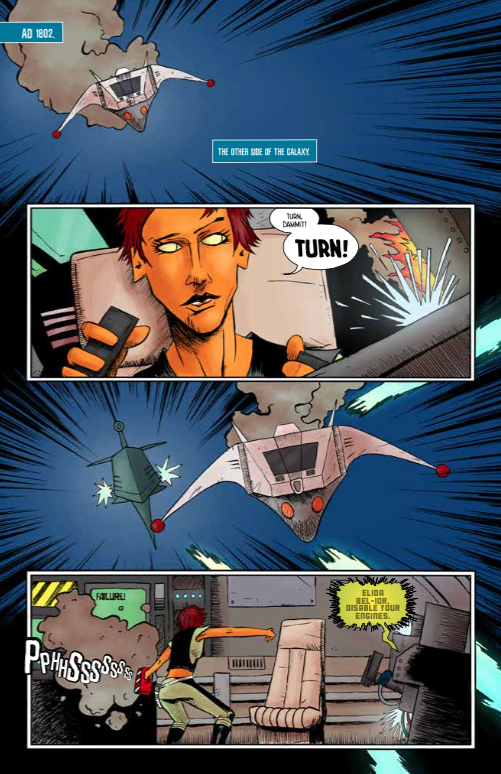 In the Kickstarter campaign, you address the problematic nature of Andrew Jackson head on. Do you think that might actually have stirred up MORE controversy than just ignoring it?

I'm actually not sure it's affected anything one way or the other. I did have some meaningful questioning when I started in response to the Kickstarter link itself, but that's more or less stopped, and I'm not sure if it's made a difference. The people who are upset about the project, I'm not sure they've clicked through to the link at all, but I really did think it was necessary to make sure it was clear, from the start, that I'm not someone who is neither unaware of nor insensitive to the history.

Have you had some pushback as a result?

Definitely. I expected some, but actually having people assuming that I'm trying to glorify, not just Jackson, but what he did, is different than just figuring some people might be upset.

Why was it necessary it be Jackson as opposed to, say, Teddy Roosevelt?

Because Jackson was a murdering bastard.

If it wasn't going to be Jackson, it would have ended up either TR or William Henry Harrison, although Harrison presents a good lot of the same problems as Jackson. Why Jackson, though? I have a much stronger fascination with the Early Republic period than I do with the late 19th-early 20th centuries, and Jackson had a much stronger influence on the character of the country, for better or for worse, than Roosevelt.

Why Jackson? Because I get his anger. Not his politics -- I'm basically a pacifist socialist -- but his anger.

Really thinking about this, Jackson and Roosevelt are very different people; Jackson came from nothing, and Roosevelt came from wealth. Both were out to prove themselves, but for very different reasons -- Jackson was trying to establish himself against Easterners who thought he, and everyone rom west of the Appalachians, was a worthless hick, and Roosevelt was trying to prove himself to himself as a result of his lengthy childhood fragilities. Roosevelt seems so much more self-aware and self-constructed, a deliberately-formed sort of attitude of swaggering masculinity, and Jackson so much more genuinely himself: an angry, hard-fighting sonuvabitch with a serious chip on his shoulder.

Honestly, I find spending time in his head fascinating. The guy is such an angry mess -- obsessed with his standing in the eyes of his betters but resentful of that fact, driven by a terrible sense of honor, brutal and unrelenting as if he's constantly trying to demonstrate that he is worthy of respect. It's a wild place in there. 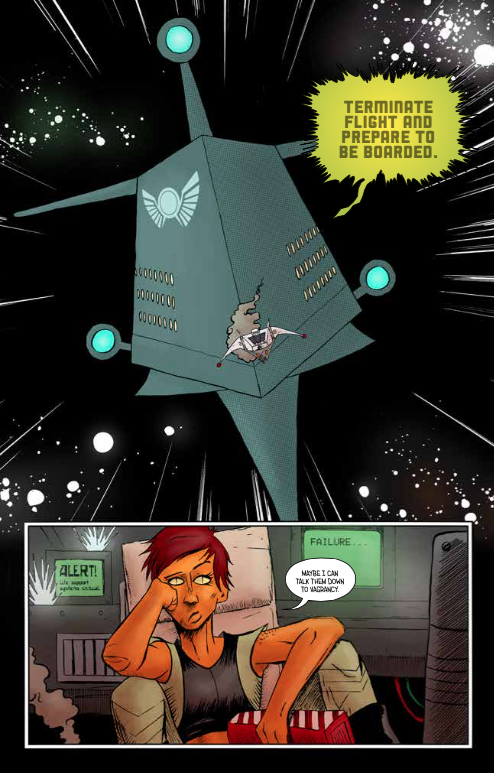 How'd you come to work with Jason Smith on this? I feel like hit style is really well-suited particularly to Jackson's real-life physical appearance.

Right? He's perfect for this.

I met Jason through my editor, Heather Antos, who I've been working with for most of the last year on my flagship project, Stronghold. Last summer, I wrote a short horror script, The Sisters, which I was super happy with, and when I was trying to find an artist for it, Heather suggested Jason, who I think she knows through her Unlawful Good crime comic anthology, to which i contributed a story. Anyway, he was a serious pleasure to work with on The Sisters, so when James Kersey, my original artist for Andrew Jackson in Space, fell through, I turned to Jason who I knew would also be able to bring the book the right kind of energy and spirit.

I also really want to give our colorist, Harry Saxon, a shout out. As we were developing the book's visual style, Jason hit on the idea of giving it this bright, 1980's-inspired color palette, and Harry has been knocking it out of the park. The bright colors, the pinks and blues, really give this book a unique look.

What about the property made you guys realize, "You know what?" There's more to this than a one-shot?"

BV: That happened really early on. This was originally just going to be a six-page short. I was developing an American history-themed speculative fiction anthology comic but it just wasn't coming together the way I wanted. Wanting to write something, I looked at my list of plot seeds and saw "Andrew Jackson vs. robots." As I started fleshing out that concept, I realized what I'd put together here was a premise that could be this sort of comic I've been wanting to do for a while: someone wandering through space, having a bunch of adventures, like the episodic science fiction I grew up watching: Star Trek, Sliders, things like that, where every story introduces new characters and new ideas. What I've been doing on Stronghold is really serialized, and I've been doing serialized for so long that I've developed a really strong desire for smaller, tighter stories, so Andrew Jackson in Space is that. 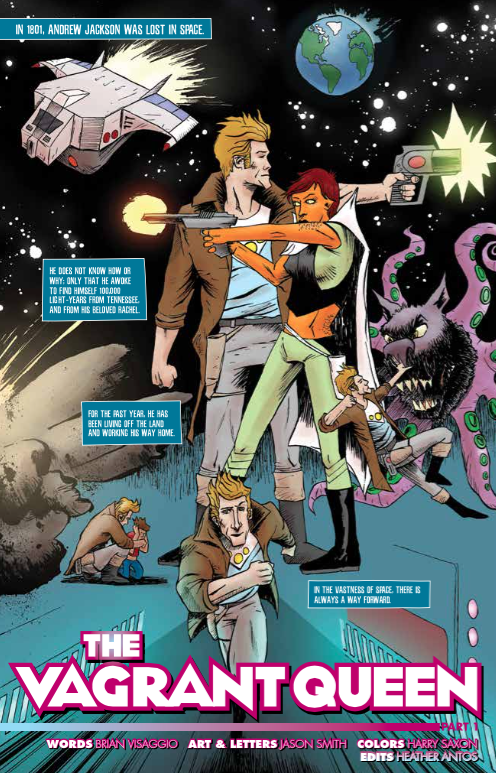 Can you tell us: Will your Andrew Jackson remember the events that have taken place when it's all done?

I can tell you but I won't. I don't want anyone assuming that things will play out the way they did in real life. They may. They may not.

Is the plot, metaphorically, something that resonates with elements of Jackson's real life?

I've tried to make use of Jackson's real life to make sure that I'm telling stories that work because this is Andrew Jackson. There will certainly be parallels and historical callbacks; Jackson famously resented people with pretensions to nobility or gentility, so in the first story, he's saddled with a couple of former royals. He was also a frontier lawyer, and that plays into the first issue. I wanted to make sure that the stories I tell with this version of Jackson are things that would resonate with his biography, but as far as 1:1 parallels -- no, he's never going to, like, fight Space John C. Calhoun.

Because making independent comics is expensive, yo, and people who make comics are poor. I'm actually really impressed by the support indie books get on kickstarter; there's a really cool give-and-take between people who want more unique comics and people who have the ability to make them. It's certainly helped diversify the landscape.

Because it's Kickstarter, I gotta ask: you want to lay out your background and past successes so that those worried about a Kickstarter can rest a little easier?

This is the first campaign I've run independently, but last year, the team on Stronghold ran a successful campaign to fund a print run of the book, and we successfully filled every order and every reward. Not sure what else to say about it.

You've got ten seconds to sell somebody on the book: what do you say?

It's called Andrew Jackson in Space. What else do you need to know?

Brian Visaggio On Kickstarting Andrew Jackson In Space: "This Guy is Such an Angry Mess"

Here's Where the Nintendo Switch is In Stock Today