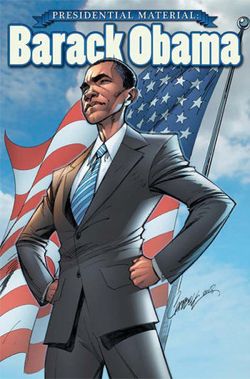 While comic books haven't seen the huge declines that many industries have seen, every industry appears to be hurting in these economic times. With so many people out of work, any product that is not absolutely necessary for survival is going to fill a pinch. Reports of comic book store closures and the recent cancellation and postponement of a couple of major comic book conventions by Wizard Entertainment suggests the comic book industry is not immune. Since Barack Obama is reportedly a comic book collector, can comic book fans count on him to bail out the comic book industry if any of the major publishers get into financial trouble? While it's doubtful that President Obama will be cutting a billion dollar bailout check to the comic book industry, he apparently doesn't need to pony up any federal money to give the industry a jolt. 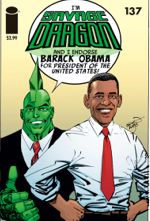 Even before taking office, President-elect Barack Obama is helping out comic book publishers. At least, the ones who are wise enough to put him on the cover of their comics. Before the election, IDW Publishing printed a Barack Obama biography comic book. According to the IDW Publishing website, the third printing of their Barack Obama comic book has sold out, and they are now going to a fourth printing. Savage Dragon, which is published by Image Comics, featured the title character actually endorsing then Presidential candidate Barack Obama on the cover. Savage Dragon #137, which contained the endorsement, went to a third printing. Even though the Savage Dragon character is hardly a household name, the comic book received international news exposure after the endorsement issue. Likely based on the huge success of the endorsement issue, Image Comics announced soon after the election that Savage Dragon #145 would feature Barack Obama's first appearance as President. 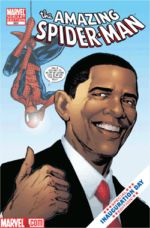 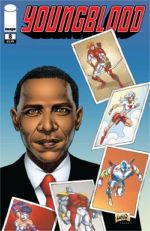 well-publicized photo of Barack Obama standing in front of a Superman statue, it is likely only a matter of time before DC Comics figures out the sales bonanza that would result from the comic book world's most powerful man meeting the real world's most powerful man. Of course, the biggest boost to the comic book industry might be if Barack Obama dons a superhero outfit and gets his own ongoing comic book series. It would not be the first time that a President has gotten his own comic book series. Does anyone remember Reagan's Raiders?

Can Barack Obama Save Comic Books?