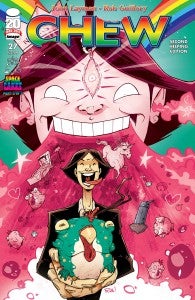 writer John Layman, co-creator of Image Comics's best-selling Chew, tweeted this evening that the television series based on that property will not happen at Showtime. "There will not be a CHEW TV series on Showtime," the writer tweeted simply, and has not followed up with fan requests for more information. It's been less than a month since Layman's artist and co-creator, Rob Guillory, offered fans an enthusiastic update on the show. "We have an awesome script written by a great writer named Brian Duffield. It's shockingly loyal to the comic," Guillory said in early January. "All the favorite characters are there, and the tone is dead on. Stylistically, it's about as close as you can get to something as weird as Chew. So right now, we're basically going back and forth with Showtime. Network stuff, which can move super-slow. But the good news is that we're taking our time with it. If it does happen, it will be good. It won't be something we just crap out." Following on the heels of the failed Powers pilot (which is currently in turnaround at FX, but commentators seem to think it's essentially a lost cause) and the abandoned Locke & Key, this seems to be part of a larger pattern of serialized comics not translating well to serialized TV. With the Batman and Marvel Studios films breaking box office records, and The Walking Dead blowing minds on cable TV, there's been a race to sign the next big thing out of comics, but the actual development of these properties seems to be slowing to a near-stop for anything that isn't a Big Two superhero property.

Chew Series Dead at Showtime, According to John Layman