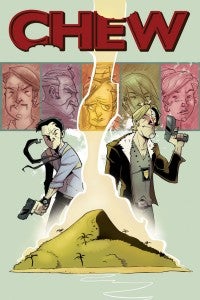 During an interview with Man Cave, Chew artist Rob Guillory revealed that the television adaptation planned at Showtime is still underway, and that it will be true to the source material. "Nothing I can really talk too much about," said Guillory when asked for an update. "We have an awesome script written by a great writer named Brian Duffield. It's shockingly loyal to the comic." He added, "All the favorite characters are there, and the tone is dead on. Stylistically, it's about as close as you can get to something as weird as Chew. So right now, we're basically going back and forth with Showtime. Network stuff, which can move super-slow. But the good news is that we're taking our time with it. If it does happen, it will be good. It won't be something we just crap out." He also revealed that, contrary to previous reports, the series will no longer be half-hour episodes, having been upgraded to a one-hour show as it developed. The artist also admitted that Lost stars Ken Leong and Josh Holloway constitute "our dream cast. I don't know about Holloway's availability, but we've been in touch with Ken Leung, and we send him books periodically. He's a fan, and if the timing came together, he would be our Tony. But it's Hollywood, and there are a million other factors. So we'll see."

Chew TV Series is "Shockingly Loyal to the Comic"

My Hero Academia Major Update to the World's Foreign Heroes

The Young Bucks Have Re-signed with AEW