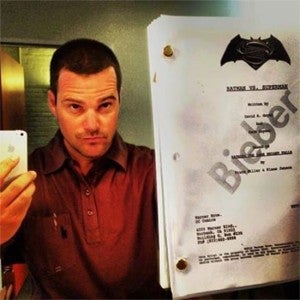 Ever since Justin Bieber sent shockwaves across the Internet by posting a photo of himself with a Batman Vs. Superman script, everyone has been anxiously awaiting official word on what his photo was all about. While most speculation points to a Funny Of Die sketch, there are still many major news organizations running headlines asking the question if Justin Bieber has been cast as Robin.

While Funny Or Die has yet to post whatever sketch Justin Bieber referenced filming for them, the site has posted a photo to their Instagram which seems to signal that they had something to do with Justin Bieber's Batman Vs. Superman script.

In the new photo on Funny Or Die's instagram, former Robin Chris O'Donnell is shown striking