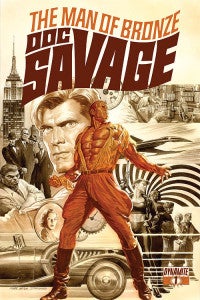 Chris Roberson, former Superman writer and co-founder of Monkeybrain Comics, will launch a new comic book series based on Doc Savage for Dynamite Entertainment, the writer revealed today. "I'll be scripting a new Doc Savage series for Dynamite, with interior art by Bilquis Evely and covers by Alex Ross. And honestly, this is a childhood ambition realized," Roberson wrote at his blog. The cover to the first issue, along with a variant cover that feels a bit Man of Steel-inspired, mimic the feel of the pulp novels that Doc Savage appeared in decades ago. 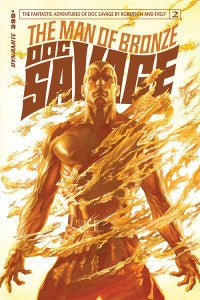 "Ever since I first started talking to the good folks at Dynamite, I would drop subtle (and not so subtle) hints that Doc Savage has always been my favorite pulp character, and that it was a shame they didn't have a Doc Savage 'type' in their lineup, and if they ever wanted to add one to the list I had some ideas," Roberson continued. "And then last year, when the news came out that the previous comics publisher no longer had the license to the character, I immediately contacted Dynamite, and said if they ended up with the license, I wanted to write it. And then I mentioned it again a few days later. And again the next time we talked. And so on. I'm half-convinced they gave me the gig just to shut me up." A Doc Savage movie is currently in development from Iron Man director Shane Black.