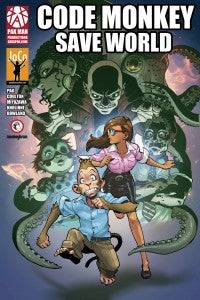 Fred Van Lente and Ryan Dunlavey will contribute a story to Code Monkey Save World, the forthcoming graphic novel from Greg Pak, Jonathan Coulton and Takeshi Miyazawa that is being funded via Kickstarter. The book, which has already expanded once and will do so again (to a total of 96 pages) if it generates a total of $130,000 in Kickstarter pledges, will feature a two-page story by the Action Philosopherscreators. The award-winning comic creators behind will bring their special talents to a two page story riffing on the real-world history and ideas behind one of Coulton's songs. (Right now "Mandelbrot Set" looks like the most likely candidate.) The Van Lente/Dunlavey story will be an extra in the printed trade paperback of Code Monkey Save World, so everyone who pledges to get a physical trade paperback will get this new Van Lente/Dunlavey story for free. In the time it took to type up those first two paragraphs, the Kickstarter campaign accomplished its $130,000 stretch goal and will feature 80 story pages and a 96-page total trade paperback. That's more than $91,000 better than the book's initial $39,000 goal. "That's one of the glories of Kickstarter," said Coulton. "If enough people come together, the project can just keep getting better and better."