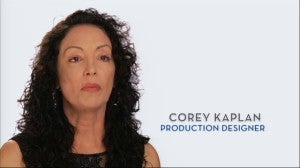 Corey Kaplan, the production designer for the hit ABC series Scandal (and formerly The X-Files) will appear at Comic-Con this week as part of a presentation by the Art Directors Guild, who hope to educate the fans about what exactly it is they do. It's an interesting panel; we've already spoken with Man of Steel's Peter Rubin, of course, but there are a number more creators we'll be talking to this week in the run-up to the show--all of whom have unique perspectives on the craft, different and fascinating jobs, and all of whom will be presenting in room 24 ABC at Comic-Con on Saturday. Kaplan joined ComicBook.com to talk about the world-building of shows like Coma and The X-Files and why somebody whose show isn't presenting at Comic-Con might find herself invited to be a key part of a panel. ComicBook.com: You probably have the closest background in some ways to Donna Cline in that you've done a lot of real-world stuff and not so much genre--except The X-Files. Kaplan: And I did Coma last year. ComicBook.com: Right. You've got a lot of kind of outliers. I look at your resume and it's a lot of real-world things and then it's The X-Files or Coma. Kaplan: You get the job and the challenge you're given and you figure out how to contend with it--that's it. That's what being a professional is about. I'm a visual professional and I consider myself a conduit to whatever the director or producer need; I put myself in the middle of their story and I try to figure out how to make it visual for them since they have a thousand other things to worry about and I have to make it come off a white page. I've got a photography background; I've made my own films. I get it in more ways than the average ComicBook.com: What's a day at the office for you? Kaplan: A production designer is kind of like being a doctor on call. Your clients are the writers, the producers, the DP, the prop people, the decorators. Anybody who's anybody. Sometimes they shoot from the afternoon til 3 in the morning and I try to keep on a 7 a.m. to 7 p.m. but on a show like The X-Files I worked all the time. You put in an extra six hours a day and then you work on the weekends, too. When you wake up in the morning--I've designed sets when I'm standing in the hot shower relaxing; I just visualize. When I get on the freeway, every time I walk into the office. It's like boom, boom, boom, boom, I've got to come up with a new idea. Then it goes on until 10 o'clock at night again. ComicBook.com: And while you say it should be simple, my next thought is that there's a different way things have to be shot and designed with a show like that where there are a fair number of crowd scenes. Kaplan: I never really consider that because it's not about the amount of the people; it's about the path that they are going through their scene. If it's like My Dinner with Andre where two people have dinner at a table and the camera just decides to circle them for an hour and a half, that's great but I did a movie called The Mindwalk and we shot that in France and it was a walk on the mountain of Mount St. Michel and to figure out how to move that camera along an island... ...it was two people talking! But that camera had to move along with them. It's all in the matter of how the director wants to shoot it. 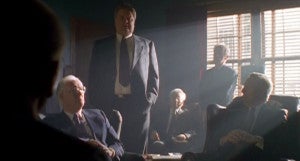 When we shot The Syndicate on The X-Files, they were all in a dark room clustered together and that's it. It was just smoky and they didn't move. Scandal is different. We have a big office and everything is moving and everybody talks fast and they walk fast. Every show has their way that they want ot conduct th elook of the show as far as the camera movement and my design has to follow that. You don't know whether it's going to be the monster show or the simple show. ComicBook.com: Other than Coma and The X-Files, it seems you're a bit less of an obvious choice for Comic-Con panelist than some of the others. Kaplan: I think that we as production designers love edcuating people on visual storytelling. It comes together through the production designer in any visual storyteling. I'm not doing animated comics, no. I've done many music videos but I think we like doing them because we like informing people about what we do and about the art of storytelling and understanding story as an artist.