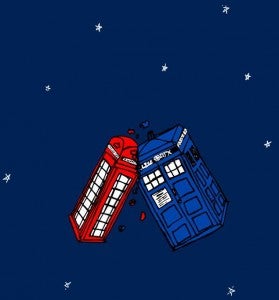 Travis Richey, who plays the Dr. Who parody Inspector Spacetime on episodes of the NBC sitcom Community, launched his own webseries on Monday that might seem...oddly familiar...to fans of the community college comedy. It's not Inspector Spacetime--NBC sent Richey a cease-and-desist order that saw to that--but after a few minor modifications and a title change (it's now called Untitled Web Series About a Space Traveler Who Can Also Travel Through Time), the inspector and his perky sidekick Piper (played by Carrie Keranen) sprang to life this week, landing on Second New Old Earth 7, a world with a complex and hilarious history that looks--conveniently for budgeting purposes--quite a bit like our Earth today. The first episode ran for just over four minutes, and there are six more installments to go (hitting YouTube on Mondays), suggesting that the Kickstarter used to fund the show's first season will essentially pay for what would look like a pilot episode for a mid-budget, high production-value sitcom. Not a bad deal, for a guy who agreed to make the whole thing not-for-profit in order to appease the NBC suits and their threat of a suit. Frankly, NBC may just be jealous that they haven't managed this yet. The episode manages to be charming, funny and convincing, giving it a sense of scope and ambition that the actual Inspector Spacetime clips we've seen on Community have yet to totally accomplish (not surprising, as we only get a moment or a one-liner at a time). Fans have been clamoring for a full Community episode of Inspector Spacetime, but it may be that they never get one, considering that right now the show only has about a half-season commitment from the network and it seems unlikely the new showrunners will be doing anything as bizarrely ambitious as that just yet. That's more the wheelhouse of series creator Dan Harmon, who was recently fired by Sony, within days of NBC buying the next season of Community.