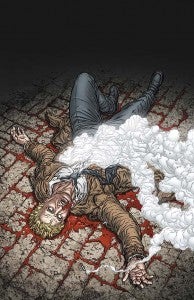 One common criticism of Reddit's "AMA" interviews is that people duck the hard questions, meaning that "ask me anything" can be short for "ask me anything, and watch me answer what serves my PR purposes."

Certainly nobody will ever accuse Constantine and Justice League Dark co-writer Ray Fawkes of this, as he used his AMA to defend DC Comics's editorial situation when asked by a reader how he and co-writer Jeff Lemire are "managing to avoid the sheer chaos that seems to have enveloped the entire DC editorial process".

That's a toughie, for sure.

"I'm not sure I would characterize it as 'sheer chaos'," Fawkes responded. "The business of mainstream entertainment is, as far as I can tell, a struggle to balance the forces of creative, editorial, marketing, legal, and scheduling. Some people are less willing to bend and flex in that environment. Some people get hit harder than others. Some find themselves clashing frequently with management, and some don't. Some people seem to dodge one bullet and then take another. Some just discover that the place they wanted to be isn't exactly what they thought it was.

"I've only been in the game for a short time, so it's impossible for me to claim that any measure of self-possession or luck or charm or whatever has enabled my survival. This seems more like a question that someone should ask me during a career retrospective, thirty years down the line."

The perception on the part of fans that DC editorial is somewhat at sea has been gaining steam ever since the company's high-profile split with Rob Liefeld last year, with events like the firing (and rehiring) of Gail Simone and then the loss of both Andy Diggle and Joshua Hale Fialkov last week playing a role.

UFC 4 Releases Biggest Update Yet, Here Are the Patch Notes