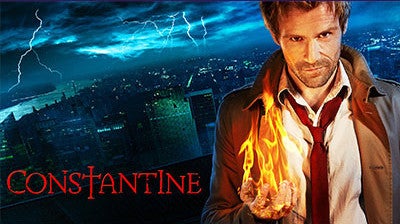 John Constantine is not Batman. That might not seem like something that needs to be said, but here, it's pertinent. The newly-released trailer for Constantine featured some Easter eggs for longtime fans of the character -- who starred in 300 issues of Hellblazer before being uprooted from Vertigo and transplanted into the DC Universe to lead Justice League Dark and headline a new comic series titled Constantine. At the time, it seemed an odd move, since while, yes, the 2005 movie had done alright and continues to sell in $5 DVD bins -- so it's arguably a bigger part of the public consciousness than was Hellblazer -- the movie was nearly ten years old and not fondly remembered by most who watched it, while Hellblazer made up for its lack of mainstream awareness by being beloved by the kind of dedicated comic book audiences likely to buy and read T+ books distributed exclusively to the comics direct market. It's that level of mythology we're looking at in the Constantine trailer, and with Constantine's numerous comic book appearances (I've actually read all of the first run of Hellblazer, but it's hard for anyone to remember everything over time), there could be things we've overlooked, so please chime in below in the comments if we missed something. 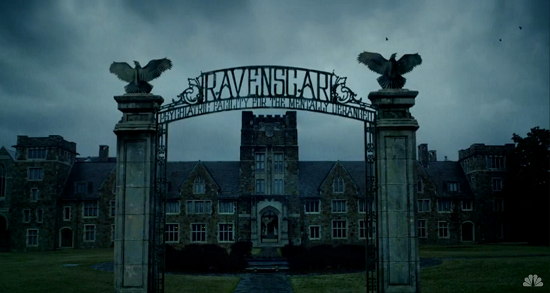 This one was kind of a freebie, since it was the first shot of the trailer, and since it was a long, lingering shot that would have made anything NOT an Easter egg or reference to the mythology seem...well, silly. The Ravenscar Secure Facility  (we'll quote from the DC Wiki since they phrase it perfectly) was a mental asylum that John was committed to between 1979 and 1982 after The Newcastle Incident (more on that below). He left and was re-committed several times over the intervening years. Eventually Ravenscar was shut down and turned into a hotel/casino. In 2007 Constantine won ownership of the place in a bet. The story of his time in the asylum was told in "Intensive Care," the story that took place in Hellblazer #7-9, so that might be a story worth picking up for casual fans or non-readers looking for some insight into the show. 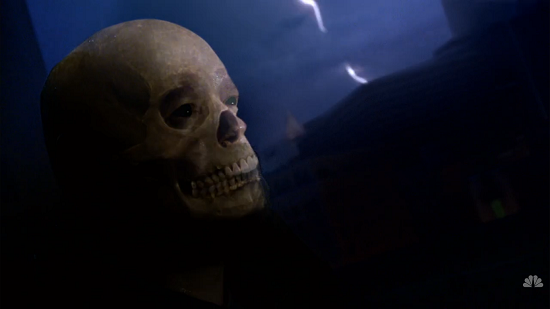 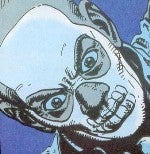 One of the blink-and-you'll-miss-it hallucinations/visions/whatever that Constantine experienced while undergoing electro-shock therapy was the above image, which seems like it could be Papa Midnite. Okay, yes, it isn't his ordinary look, which is more just a guy in a suit and hat. Nevertheless, a quick Google Image search will bring you the shot at right, which shows a young Midnite during some of his early experimentations with voodoo. It would seem like kind of a stretch, except for the fact that the character appeared in the very first issue of Hellblazer and also in the movie version. Midnite is a pretty key part of the Constantine mythology and seeing an image that calls back to him even subtlely is worth a nod. Midnite, an immortal organized crime figure who uses magic to accomplish his ends and also keep from dying, wavers between being an ally and enemy to Constantine but arguably more importantly, he lives in New York, which is where the series is purported to be taking place even though Constantine has retained his British citizenship here, whereas he did not in the film. 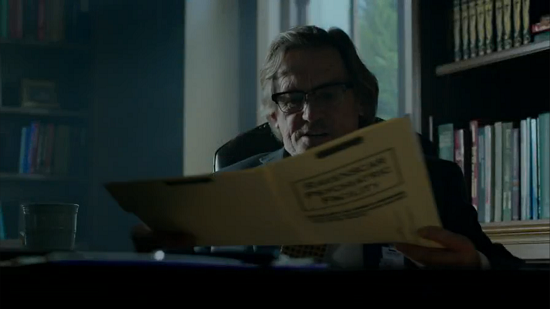 Dr. Huntoon This is a minor one since it ties so closely in with Ravenscar, but it's indicative of the type of show it seems likely we're in for. According to IMDb, the psychiatrist we see immediately following Constantine's first series of creepy visions is Dr. Huntoon (played by Miles Anderson). Constantine was indeed treated by Roger Huntoon at Ravenscar in the comics. The snark In the Keanu Reeves version, Constantine wasn't particularly quippy; that was primarily left to Chas who, played by Shia LaBeouf, sucked. In the comics, though, he's a sarcastic, snarky jerk. Maybe not always funny, but cutting and clever. It comes with the whole "con man" persona. And here it really comes through that he's supposed to be played that way, with things like his "dabbler in the dark arts" remark. 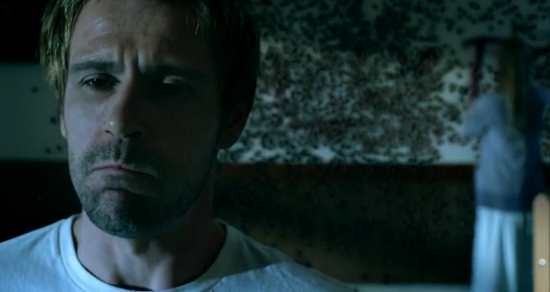 Moral ambiguity The idea of his condemining a girl to hell (more on that later) is pretty telling. The "this is not my problem" moment, too, is an indication of how Constantine could often be played in the comics -- he either fell backwards into his adventures to protect himself or his "friends," or he found himself simply unable to keep from being somewhat heroic because of circumstances outside of his control. 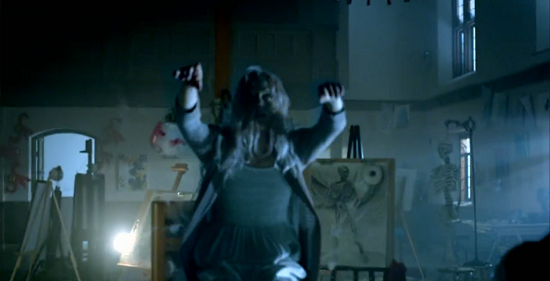 Creepy art room The resolution isn't really sufficient to get a great look at the pieces around Constantine when he's in the art room at the psychiatric hospital, but one we get a fairly clear look at -- behind the possessed girl in the photo above -- appears to be a skeleton with angel's wings and a sword. While obviously there's a skeleton there in the room, presumably for anatomy help to people drawing or painting the human form, it's interesting that images we see echoed in real life later are in this art room. Is that Constantine's, or the possessed girl's, or are others in the hospital also connecting with the supernatural A-plot? 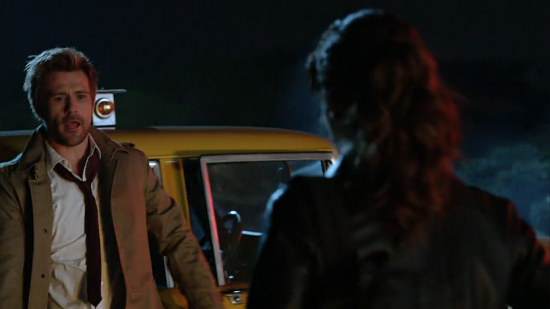 Chas's taxi Lending to the kind of general weird, dated creepiness of everything being so analog in this trailer is the taxi driven by Chas, which shows up in the trailer before we even see Chas's face, with Constantine stepping out of it to approach Liv. Manny the Angel While not a character directly from the comics, Manny isn't unlike some of the holy creatures we see from time to time. While various religions and their realms have been depicted, Constantine is often torn between fairly standard Judeo-Christian depictions of Heaven and Hell. 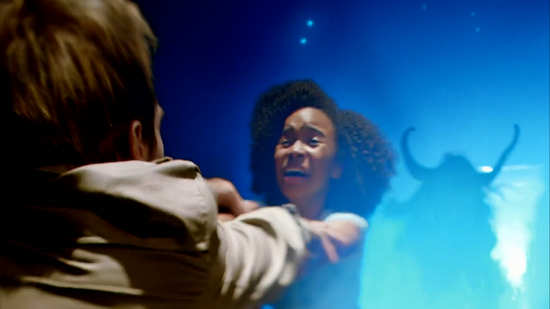 Astra and Nergal It's not totally clear whether that will absolutely be Astra, but it makes sense that it's her being dragged to Hell -- and if so that it's Nergal doing the dragging. This incident was one of the key early failures of Constantine and helped to put him on a (slightly) less selfish path. The event -- the aforementioned Newcastle incident -- went down as follows: Alex Logue's abused daughter, Astra, had summoned up a demon called Norfulthing that had killed Logue and his associates during an orgy. John Constantine tried to summon another demon to defeat it but failed to name and bind it properly. That demon, Nergal, kiled Norfulthing and dragged Astra to Hell. This failure sent John completely insane. He was committed to Ravenscar Secure Facility. The guilt stayed with him for a long time. Fire hands/stage magic 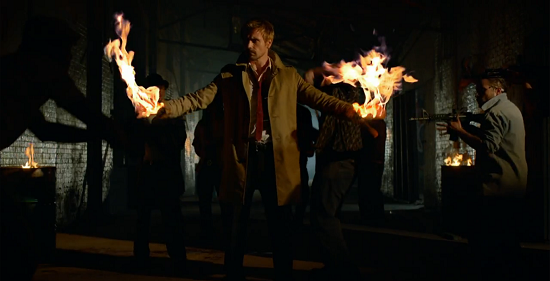 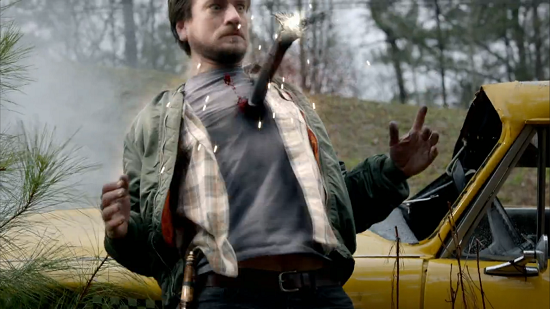