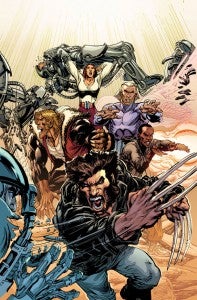 Comic book icon Neal Adams took to his Facebook page about an hour ago to promise fans that he was nearing the end of his miniseries, The First X-Men. That's not all, though; the artist also took a moment to speculate that perhaps Marvel wouldn't be finished with the characters and concepts contained in those pages when #5 hits the stands in 2013. "I'm working on the fifth, and last issue of The First X-Men," Adams said. "I can't help but wonder if Marvel is going to continue the series, and give it a regular title." It's not much, but given the radical reinvention of the Marvel publishing line under Marvel NOW! starting next week, the recent death of a key character who's set to play a role in such a title and the proximity to New York Comic Con (the rest of Adams's comments on Facebook were about where to find him at the show), one has to wonder whether there's something more to it than meets the eye. "Of all the mutants on Earth, Professor X could easily pass as a human," Adams said of the title back when it was announced. "Why would he want to get involved in this? Maybe all this was going on before Professor X was Professor X…when Professor X was a teenager. Maybe mutant kids were getting abused by the military, by the government. Somebody would have been looking out for them, but maybe that person came to Charles Xavier, realizing he couldn't protect these kids. That was my pitch." Christos Gage, who scripted the story, added that "It takes place before the original X-Men and at a time when the government was snatching mutants up and doing scary things to them. Logan notices this and thinks somebody needs to look out for them. He recruits Sabretooth, who asks 'Why?' and so he pays him. Professor Xavier is a young man studying at Oxford, who's engaged and wants nothing to do with this."

Could The First X-Men Go Ongoing?