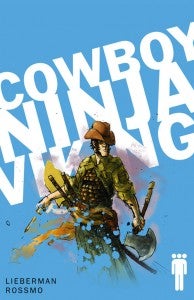 Image Comics has certainly released a comic book series that is setting itself apart in many ways, the most obvious of which is the oversized form the book Cowboy Ninja Viking comes in. The title, which refers to the three different personalities sharing space inside protagonist Duncan's psyche, also is quite attention-getting, as three distinct warriors are joined together. The concept for the book, a group of patients living with Multiple Personality Disorder who were part of an experiment to create a counter-intelligence group using the abilities their personalities had are one the loose, is a unique one, and the art is quite different for a typical comic book, but overall the book seems to be struggling with balancing all that's going on inside as well as Duncan in this premiere issue. AJ Lieberman, the writer for this series, sets out with a story that takes us to several events spread out over the course of several days. A cryptic scene with an oceanographer taking part in the blowing up of a ship starts us off, but the action quickly shifts to the present, where Duncan, the home to the three distinct cowboy, ninja and viking personalities, finds himself in a bit of a predicament. As the three personalities inside him fight out how to handle this strange woman, Nix, standing in front of them with a small army behind her, the details of what exactly is happening get revealed. Duncan is what is known as a 'triplet', someone with three distinct personalities, each possessing skills of a certain set. As the issue goes on, we find out that there are other triplets out there, each, at some point in the recent past, recruited by a Dr. Ghislain, to be part of a special project using the triplets and their skills. While the narrative shift in time is not hard to follow or understand, the exposition of the background information, such as the doctor's explanation to Duncan about his role in his life, seem too forced and not paced enough to not feel like a pause for the sake of exposition. The issue does end with a feeling of purpose and an excellent set-up for issue number two, with Duncan charged with finding one of the triplets who has gotten involved in some deadly business, the same oceanographer from earlier, natch! There's hope that this series will get stronger as it builds, but issue one seems a bit hamstrung by trying to do a bit too much right away where the back story is concerned. A major plus that keeps the issue with some positives is the dialogue between the cowboy, ninja and viking. Each is given his own clever thought bubble to help differentiate the discussion and to lend a distinct personality to each, well, personality. There's also something to be said for the artwork, which is quite bold with its tones and shades of blue set against a black and white world, which apparently will be black and white in color only. There's an interesting mix of pop art and heavy lines in the first issue, which works quite well for the tone the series appears to be taking, the mix of the details with the impression of the real thing creating the sensory environment for the characters and the reader. Potential for this series is quite high, but only if the initial lagging in pace are reserved for this issue. When the characters are allowed to just be themselves, the information is interesting and quite effective, but the expository pauses to cram back story and character origins into our minds don't feel natural, and it doesn't seem to make the reader stay focused on the task at hand. Perhaps the first two issues could have been used to give us the history rather than doing so much in this premiere. Duncan is a hero/protagonist unlike any other, and his story certainly deserves the time, and pace, to unfold in time.