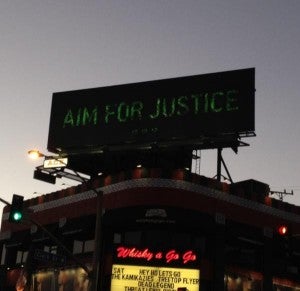 While those of us in the comics community have been waiting with bated breath for the upcoming CW Television adaptation of Green Arrow, titled simply Arrow and starring Stephen Amell as Oliver Queen, most of the rest of the world doesn't quite know what we're talking about yet.

Well, that's all about to change. If this billboard tweeted by showrunner Marc Guggenheim is any indication, it seems as though Warner Television is getting ready to kick the promotional campaign for the show into high gear. The sign in question can be seen here above the famous Whiskey a Go Go on Sunset Boulevard in Los Angeles.

Aim for what, now? Seems as though, even with an edict coming down from above that there will be no superhumans in this show, the fine folks at Warner TV aren't too shy about bandying around that J word...!

CW's Arrow Gets a Billboard That's Hard to Miss