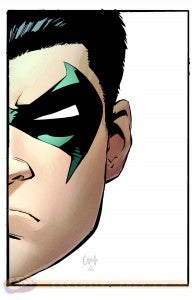 Since the death of Damian Wayne, Batman's son who was the most recent Robin, fans have debated who might--or should--step into his boots as Robin.

But Grant Morrison--the Batman Incorporated writer who both created Damian and then wrote the issue in which he died--told USA Today that if it were him, there wouldn't be a Batman for a while.

"One of the reasons I did this was to take Batman back to the very beginning," Morrison said, "so when I was finished, all the toys go back in the box and what you've got left is a Batman driven by vengeance, Alfred's a butler, there's a Batcave and that's it. I wanted to take him to what he was at the start, and it's probably a good idea to just let him run around on his own."

And lest fans think Morrison is taking the easy way out by killing Damian on his way out the door, the writer admitted, "I was kind of heartbroken when he died. I'll never write that character again and it was quite weird to do that."

Damian Wayne Creator Morrison: There Shouldn't Be A Next Robin