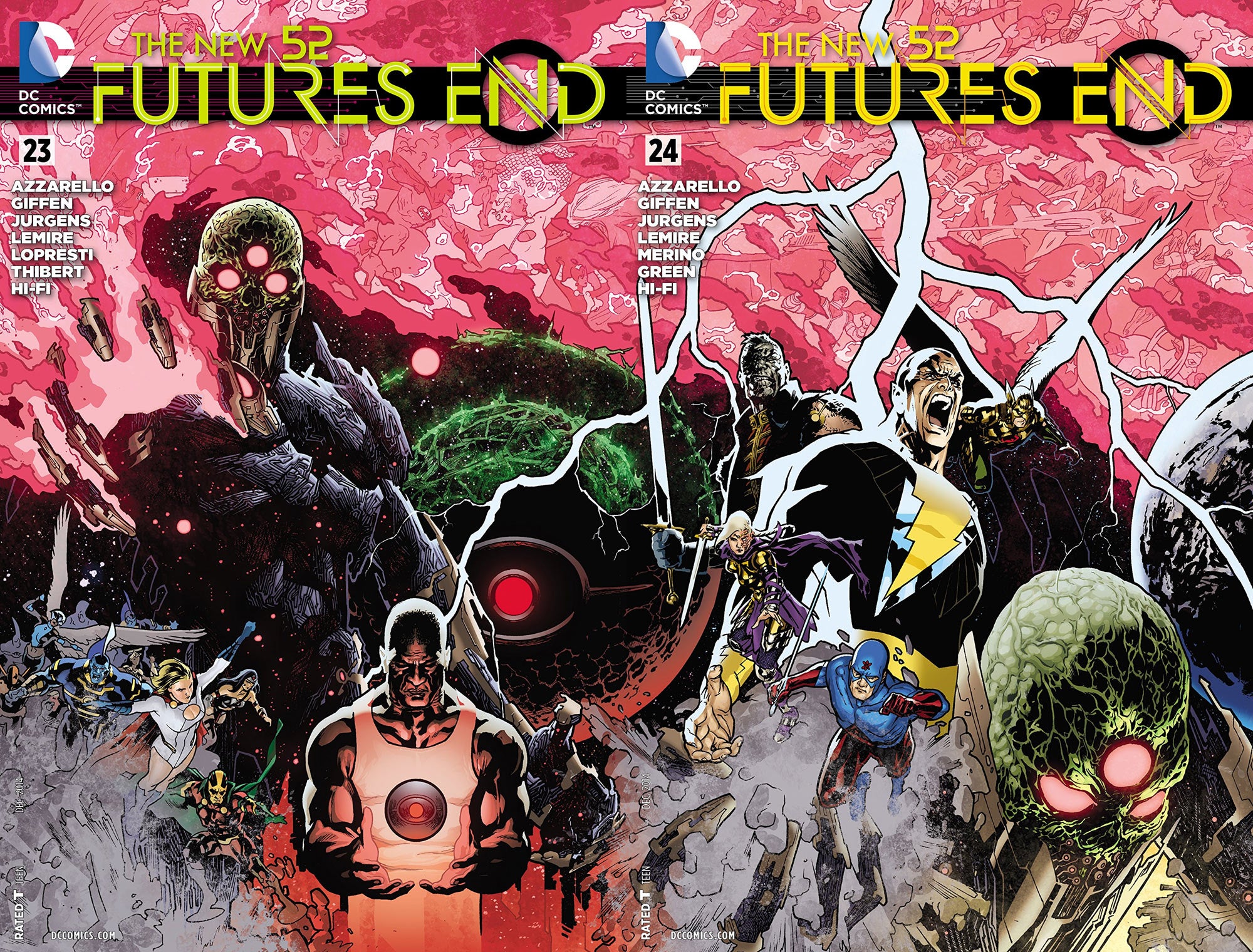 DC Co-Publisher Dan DiDio took to Facebook today to tease The New 52: Futures End's upcoming issues which, beginning this week, will feature the villainous upgraded "super-Brainiac" who has been operating in the background of the story, aiming to gain access to Vanishing Point and observing the DC Multiverse...

...Including worlds that seem to be ones assumed to have died out during or prior to the company's 2011 crossover event Flashpoint.

The cover to #23, seen at left above, features the pre-relaunch versions of Hawkgirl, Deathstroke the Terminator, OMAC, Mr. Terrific, Batman and a Robin who wears the Dick Gryaon/Jason Todd version of the costume, Power Girl, Grifter and some more I can't make out. The theme is continued in the cover for #24, which features pre-relaunch versions of The Flash, the Legion of Super-Heroes, the Teen Titans (including Donna Troy and a white Wally West), Hawkman, Captain Marvel/Shazam, Jonah Hex, Wonder Woman in her invisible jet and more.

Besides the Futures End material, DiDio has shared a number of other DC publications, usually those with ties to previous time-travel and Crisis-level events.

Here are some of the books (not his photos, which are of his collection, with longboxes and other books in the background), along with his captions for the images: 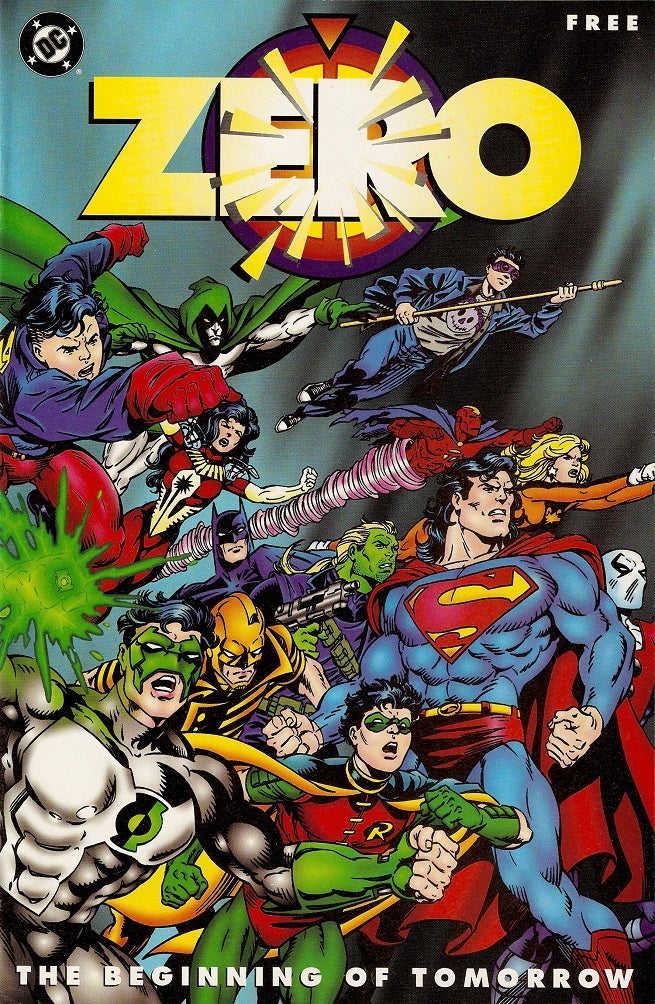 Whoa. Found this mixed in with the Marvels. Now I'm not sure where to file it since I keep hearing those stories don't exist anymore. 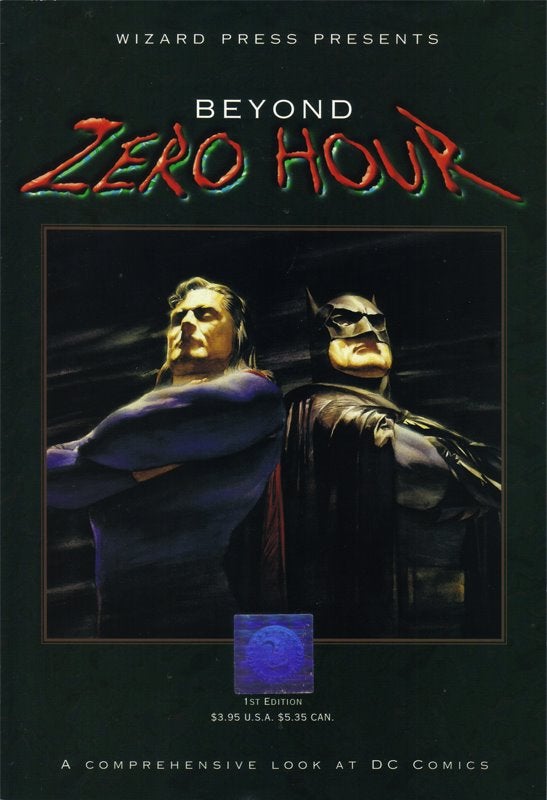 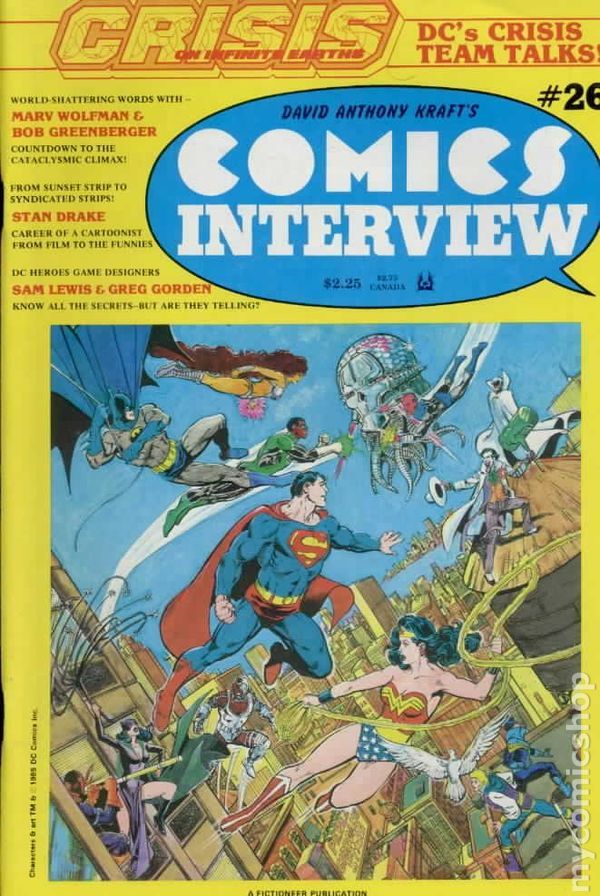 Is this the Wizard book you were referring to? Just happened to have it out.

While I don't own Comic Interview #26, I do happen to have copies of both Zero Hour books in my office, and will try to leaf through and see if there's anything of particular interest in them.

"In away, projects like that are necessary every few years," Zero Hour writer/artist Dan Jurgens told ComicBook.com in an interview in 2012, looking back on the event. "Comic universes can be a bit like a closet that you continue to throw stuff in. Every so often you have to open the door, take a deep breath and wade into it, deciding what to keep and what to discard."

It certainly looks at the moment as though DiDio -- with the help of Jurgens, who is a co-writer and co-artist on The New 52: Futures End and who wrote key Futures End one-shots like Superman and Booster Gold -- is looking to keep a whole lot more this time around...!