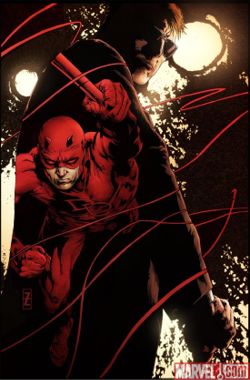 As most Marvel Comics milestone issues tend to do, Daredevil #500 has sold out at the distribution level. Marvel has just announced that they will be going back to press on Daredevil #500 with a second printing. The Daredevil #500 Second Printing Variant is written by Ed Brubaker with art by Michael Lark, Klaus Janson, Chris Samnee, Paul Azaceta, David Aja and more. In this issue, Daredevil stands against his greatest challenge yet and one shocking decision will change Hell’s Kitchen forever. Daredevil #500 also includes a special all-new story by Ann Nocenti & David Aja, a pin up gallery, and a special reprint of a key issue by Frank Miller. Also, the issue contains a first look inside Dark Reign: The List—Daredevil by Andy Diggle & Billy Tan. The Daredevil #500 Second Printing Variant cover is by Patrick Zircher. The second printing is scheduled to arrive in comic book stores on October 7, 2009.

Daredevil #500 To Get A Second Printing