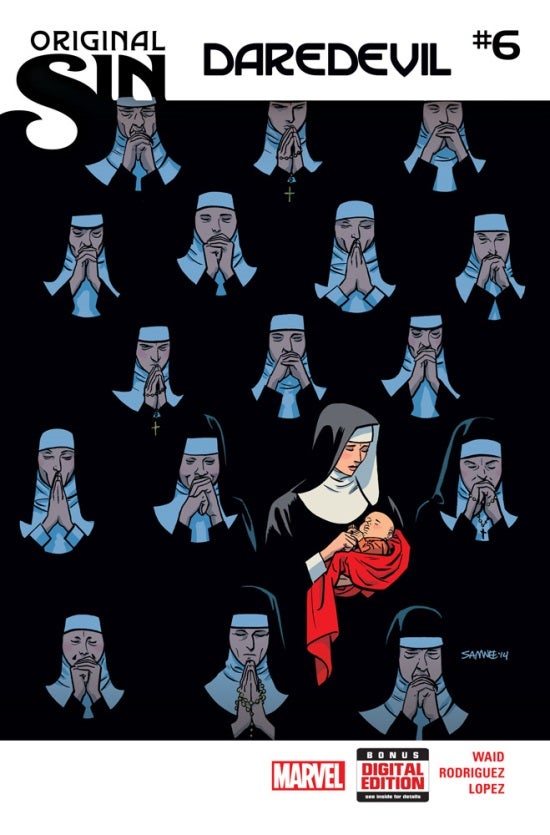 Marvel Comics has announced that Daredevil #6 will be an Original Sin tie-in issue. The official announcement follows a teaser released last week hinting at Matt Murdock's own "original sin." The issue promises to reveal the truth about Matt Murdock's mother and will be written by series regular Mark Waid with art from Javier Rodriguez. Matt Murdock was raised in a broken home by a loving father who fought a daily struggle against his personal demons. Matt made peace with is mother's absence long ago, but never really knew the story of why she left him and Battlin' Jack Murdock. He's about to find out. A secret from Matt's past sets him on a journey to find answers and those answers, in turn, will send him to his mother's doorstep. Once there, Matt will find his mother in more trouble than he could have imagined. "Matt learns something very startling about his mother in the Original Sin limited series that he's compelled to investigate, but there's a reason he can't just ask her directly and end the story on page five," say series writer Mark Waid in an interview with Marvel.com. "All I can say about her current situation is that Matt will never be more regretful that he's no longer licensed to practice law in New York State…" Readers can find out how Matt Murdock's mother became Sister Maggie when Daredevil #6 is released in July. DAREDEVIL #6 Written by MARK WAID Art by JAVIER RODRIGUEZ Cover by CHRIS SAMNEE On-Sale This July!

Daredevil #6: The Truth About The Murdock Family Revealed In An Original Sin Tie-In