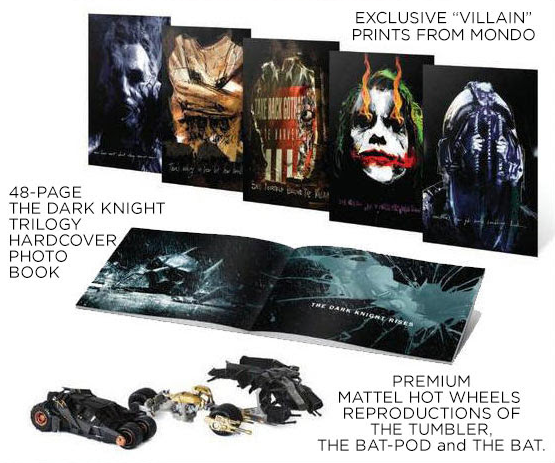 If you already owned The Dark Knight Trilogy on Blu-ray and thought the $100 retail price was just a little too high a cost for that cool poster or toy you would really have liked to get your hands on when the recent Ultimate Collector's Edition hit, you're in luck: with the holiday shopping season nearly over, Warner Bros. is offering fans a chance to buy all those accessories directly from their website.

The "Memorabilia Pack," which includes five posters designed by the fine folks at Mondo as well as three Premium Mattel Hot Wheels replicas of vehicles from the films and a 48-page hardcover photo book, will run you just $14.99 at the moment, while you can get the whole Dark Knight Trilogy Ultimate Collector's Edition (which includes all of that stuff plus the actual movies, an exclusive special features disc and an introductory letter from Christopher Nolan) for $50.

DVD and Blu-ray trilogies which include just the movies and a paperback photo book will run you between $15 and $20, effectively rendering every version of these movies at every retailer overpriced at the moment.