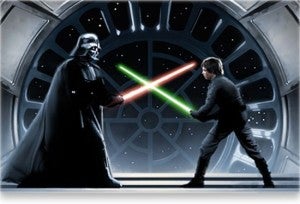 What's the greatest rivalry in the world of movies? According to a new poll conducted by LoveFilm, Darth Vader and Luke Skywalker are the most memorable film rivalry.

Lovefilm editor Helen Crowley said, "The rivalry between the hero and the anti-hero is often what makes a film or TV show so compelling and in a lot of cases is one of the reasons we fall in love with the character in the first place. Batman wouldn’t be what he is without the Joker and the same can be said of Luke Skywalker and Darth Vader – and we love to watch these power struggles play out."