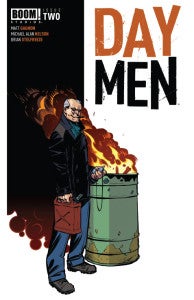 BOOM! Studios announced late last night that Day Men #2 from writers Matt Gagnon and Michael Alan Nelson and artist Brian Stelfreeze has sold out at the distributor level and will head to a second print to meet demand.

“I couldn’t be more grateful and appreciative to the comic book industry for embracing this series like it has,” said BOOM! Studios Editor-in-Chief and Day Men writer Gagnon. “We love telling these stories. From all of us on DAY MEN—and at BOOM!—thanks for your overwhelming support.”

For thousands of years, the world has been controlled by the “50 Families”—a secret network of vampire covens engaged in a timeless struggle for power. But when the sun rises, the vampires are forced to employ the services of a human who acts as their daytime fixer and protector. Trained for centuries to be the mortal soldiers of their vampire employers, the Day Men go forth at sunrise, alone into the world, to do the bidding of their sleeping benefactors.

After nearly six months between #1 and #2--widely believed to have been caused by Stelfreeze, who is doing his first sequential work in nearly a decade on the title--the third issue is expected to hit in January, as will the reprinted #2. Back in August, shortly after the sell-out of #1, Universal Studios announced that they had optioned the property for motion pictures.

Universal has worked with BOOM! before--on this summer's 2 Guns. The film's small budget made its $75 million domestic haul a big overall success for the studio. Rumor has it 3 Guns, the comic book sequel, is already being developed as well.

Day Men #2 Sold Out at Diamond, Going Back to Press