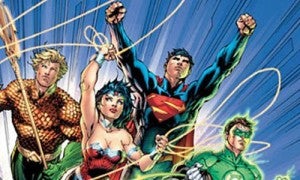 is shaking things up in a big way. After weeks of rumors about what was going to happen after the Flashpoint mini-series, DC Comics has officially announced their plans. DC Comics will be relaunching its entire line of DC Universe comic books with 52 first issues.

On the week of August 31, 2011, DC Comics will only release two comic books: the final issue of Flashpoint and the first issue of an all new Justice League. The new Justice League title will offer a more contemporary take on the origin of the team and will be written by Geoff Johns with art by Jim Lee. Many DC characters will also get brand new looks for their uniforms.

In addition to relaunching the DC Universe, DC Comics will also be making a major change to their digital comics strategy. With the publication of Justice League #1, DC Comics will launch day-and-date digital publishing for all their ongoing titles. This move will make DC Comics the first of the two major American publishers to release all of its superhero comic book titles digitally the same day as in print.