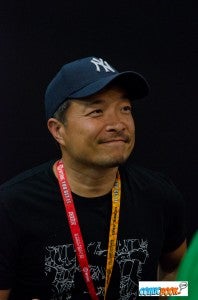 The event started off with a slideshow about DC work throughout entertainment and the world.

First was a slide for the Arrow show, where DiDio said was his favorite DC live action series, while Lee commented how buff the lead actor, Stephen Ammel, was.

Next was Before Watchmen, which DiDio said was met with doubts, but has been a great success for DC.

Slides for the Death of the Family Joker covers came up and they shared that using them as the main covers was based on feeling that Capullo's work was too good to limit the audience of.

The Superman book from Snyder and Lee will be about how Clark Kent is very much a part of him and deal with "his ultimate fear".

The Justice League of America book/team is "the complete counterpart to what the Justice League is" and are "combative", not so much a "compliment". Lee promised that people will like Vibe.

DiDio is excited about his Phantom Stranger project and likes working on something that is "a little quirky and different".

Django Unchained will be using the entire original screenplay from Quentin Tarantino, including things cut from the movie.

The Girl with the Dragon Tattoo will be similarly adapted (from all three books of the series), with each book getting a two part graphic novel.

The Gaiman/Williams III Sandman project is a story from before Sandman #1 that Gaiman always had in mind, while Williams III's art will leave you "blown away".

They went over how DC now has a new digital comic coming out each weekday (Ame-Comi, Batman: Arkham City, the "Beyond" stories, Batman: LotDK & Smallville). All are set at $.99 an issue to let them be impulse purchases.

DiDio is thrilled that going day-and-date with digital hasn't hurt print, but has seen print grow during the period.

Lee addressed the Injustice: Gods Among Us is a hot property and will have a digital comic tie-in. He added that DC has high hopes for the game and he plans to STEEL the move OF SuperMAN for his project with Snyder.

Wonder Woman's attraction to Superman, which differs from her usual attraction to regular human partners, is a crucial part of the Trinity War.

The plan to have Tim Drake have been only Red Robin and Batman's apprentice was always part of the plan, with the earlier issue claiming him as having been a Robin a mistake that slipped by (but was fixed for the trade). Lee excitedly shared that they fix those things on Comixology, too, where it will replace the original with the corrected copy.

The co-publishers rarely disagree, with DiDio referring to Lee as the "smartest man in the room".

Wayne indicated that they're always evaluating 80s properties (like All Star Squadron) to decide if they should put out a collection.

Captain Comet might be seen in Threshold, where half of the book will be about Larfleeze and the other half filled with a rotating cast of cosmic characters.

They're trying to use larger series, like JLA, to launch B and C list characters, like Vibe, and they've had Talon come out of the Court of Owls event. More important than that is choosing the right time and creators.

Addressing the Facebook poll that had the most responses be to bring back the entire old universe or just characters like Wally, Stephanie or Donna, Didio said sales are their most important feedback. He said that, when they were coming out, Gotham Central would be claimed as everyone's favorite (including DC's), but constantly get outsold by 70k copies by Superman/Batman (which was more often derided).

No plans for Max Faraday, but never say never.

Ragman & Creeper have been part of many discussions, just without the right pitch having surfaced yet.

Wayne indicated there are huge plans for all the big character anniversaries coming up.

Lee indicated he's not a fan of augmented reality, saying that he has yet to see anything that actually enhances the comic reading experience.

DiDio told a fan that they find writers by looking at other books, saying he'd rather DC be their last stop than their first.